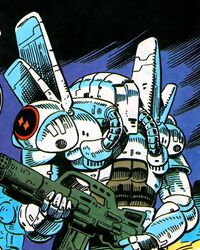 Base of Operations
Canada
Affiliations

The reality of Earth-9418 had a similar history to Earth-616. However, after the implementation of Canada's Super-Powers Registration Act on Earth-9418, Alpha Flight found themselves competing with the Hardliners to capture and contain unregistered super-powered individuals. The Hardliners were willing to use violent and brutal methods to capture super-powered individuals, including murder. It soon became apparent that politician Robert Hagon and the Hardliners were a puppet for Joshua Lord who was capturing the super-powered people for experimentation.[1]

Lord then lead a slaughter of baseline Canadians by his Hardliner forces and performed genetic engineering on most of the remaining populace. Lord's actions were hidden from the rest of the world by a protective web around Canada that prevented news from spreading to outside sources and also erased memories for those who passed through the psionic web (so that anyone who left the country would forget what happened). After years of resistance by Alpha Flight, the surviving members attempted escape but Lord ordered a strike team of Hardliners and super-powered operatives to intercept them. Alpha Flight's members were killed or contained, eliminating the chance for help from abroad.[1]

Retrieved from "https://marvel.fandom.com/wiki/Hardliners_(Earth-9418)?oldid=5547559"
Community content is available under CC-BY-SA unless otherwise noted.