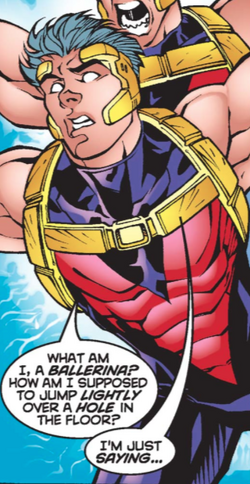 Under unknown circumstances, Harlan and his brothers Sven and Eric were recruited into the Acolytes, believing Magneto to be the savior of mutantkind. On their first mission with the Acolytes, the Kleinstock Brothers were sent alongside Cargill and Unuscione to kidnap a young mutant. During the mission, the Acolytes murdered Sharon Friedlander, a former staff member at Charles Xavier's School for Gifted Youngsters. Unbeknownst to the Acolytes, Friedlander's psionic cries for help to Xavier alerted the X-Men to their activities. In the ensuing battle, Eric Kleinstock was shot and killed by Tom Corsi, another staff member from Xavier's school. Harlan and Sven, seemingly unfazed by their brother's death, continued to battle and defeat Archangel until they were telekinetically slammed together by Jean Grey. Harlan and Sven then merged together into their gestalt form, simply called Kleinstock by Unuscione, and fought Bishop. After discovering their target was a child with Down's Syndrome, the Acolytes abandoned the mission and retreated.[1]

Despite losing their brother, Harlan and Sven continued to serve with the Acolytes.[2] They soon suspected Colossus of being a traitor to the Acolytes.[3]

Harlan survived Holocaust's destruction of Avalon alongside Sven, Unuscione, and Cargill, and evacuated to Earth with Cyclops. The group crash landed in the Australian Outback, where they managed to get to the X-Men's former base of operations. Once help arrived, the Acolytes turned themselves over to the authorities.[4]

Later, the Acolytes presumably escaped prison as they had returned to serve Magneto.[5] Harlan and Sven later participated in the attack on Wundagore Mountain under the leadership of Exodus.[6] [7]

Magneto ordered Amelia Voght to separate the best of the Acolytes. The Kleinstocks were ordered to follow Fabian Cortez alongside Senyaka, Spoor, Projector, Rem-Ram, Static, and Barnacle as they attacked the X-Men's mansion. After the Acolytes were defeated, they asked for sanctuary with Xavier. Xavier denied them compassion after failing with Sabretooth.[8]

Harlan, Sven, and the other rejected Acolytes later attacked Genosha. The brothers' former comrade Cargill ambushed the Kleinstocks, but the renegade Acolytes were empowered by Cortez and easily defeated the Genoshan forces. However, Cortez quickly betrayed the group and stopped amplifying their powers, allowing the Genoshan government to defeat them.[9]

It is unknown if the Kleinstock Brothers retained their powers after Decimation.

Gestalt Form: Harlan has the ability to merge into one being with his brother, possessing double the size, strength, and toughness that he would as an individual. The merged entity has two torsos, and while in this form the brothers have a merged psyche.

Plasma Blasts: He can also generate plasma blasts from his hands.

Pyrokinesis: In the past, the Kleinstocks could create immense waves of flame by igniting molecules of oxygen. This ability seems to have been lost.

Harlan possesses the normal human strength of a man of his age, height and build, who engages in intensive regular exercise. When merged with his brother, his strength is doubled.

Like this? Let us know!
Retrieved from "https://marvel.fandom.com/wiki/Harlan_Kleinstock_(Earth-616)?oldid=5483325"
Community content is available under CC-BY-SA unless otherwise noted.