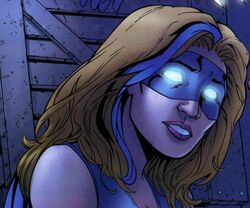 Harley was spending time at the movie theater in her hometown of Springfield with her family when she was accidentally electrocuted after soda spilled onto her hand as she plugged in a machine. The town of Springfield experienced a blackout and Harley's powers were reactivated after they had laid dormant for several years. Harley's skin and eyes began to glow and a blue streak appeared in her hair

Harley's husband Gus Davidson found her changed into her old costume and she informed him that the Guiding Light had returned. Harley told her husband that her powers were back and that she couldn't turn them off just before they meet Wolverine and Spider-Man. They take Guiding Light and her husband to the rest of the Avengers who were attacked by the Sinister Six when they left their Quinjet. The Sinister Six wanted Guiding Light to become one of their members but she instead zapped Sandman with an electric blast after he called her "toots". Guiding Light also attacked Hydro Man in her energy form when he attempted to drown her husband. Guiding Light was 'shorted out' and returned to normal. Harley quickly recovered and Iron Man told her that the energy signature in her body was gone although he didn't know if it was permanent or not. Iron Man then gave Harley an Avengers priority call card and told her to use it if she got into trouble again.

Guiding Light had electrical and light based powers. She could emit electrical blasts from her hands, possessed super speed and was capable of flight when in her energy form. Her skin tended to illuminate and glow when she was powered up.

Like this? Let us know!
Retrieved from "https://marvel.fandom.com/wiki/Harley_Cooper_(Earth-616)?oldid=5505299"
Community content is available under CC-BY-SA unless otherwise noted.