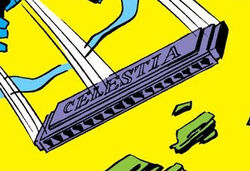 The harmonica was originally owned by Celestia Denton and was inscribed with her name. After she was in a horrific car accident, the Nameless One kept her alive, altering the course of destiny. It appears that the Nameless One placed a spark of life essence within the harmonica, which was the source of Denton's continued existence.[1]

Transformed into a mystical item of great power, the "Harmonica of Destiny" was next seen in the subways of Manhattan. It was being played by a young girl who turned out to be the mystical embodiment of Destiny. The girl fell in front of a subway train and when Doctor Strange attempted to rescue her, she told him that she was of no consequence, to save the harmonica. After making a split-decision, Strange decided to save the harmonica and later communicated with the essence of Destiny, who had exploded into a dazzling array of sparks after being hit by the train. Destiny informed Strange that all of those present at the subway station would have their destiny reshaped according to their actions. As Strange tried to save all those who were present, the Enchantress, disguised as the Valkyrie, went to his Sanctum Sanctorum and told Wong that Doctor Strange requested her to take it.[2]

Like this? Let us know!
Retrieved from "https://marvel.fandom.com/wiki/Harmonica_of_Destiny?oldid=6435695"
Community content is available under CC-BY-SA unless otherwise noted.