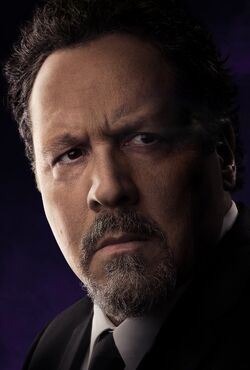 When I told people I was Iron Man's bodyguard, they laughed at me! I had to quit to save whatever dignity I had left!

Harold "Happy" Hogan is a long-time friend of entrepreneur Tony Stark. For many years Stark employed him as his personal bodyguard and chauffeur.[1]

During the Monaco Grand Prix, Happy risked his life trying to get the Mark V suitcase armor to Tony Stark as Stark was being attacked by Ivan Vanko on the race course. He later accompanied Natasha Romanoff on her attempt to stop Vanko from his attack on the Stark Expo. Despite her demand that Happy remain a safe distance, he insisted on lending further aid and was able to battle one security guard to a standstill while Romanoff took care of the rest deeper in.[2]

Happy eventually became uncomfortable with his role as the "Iron Man's bodyguard" and was granted a new position as the head of security in the management complex of Stark Industries. It was in this capacity that he encountered Eric Savin, and Savin's boss Aldrich Killian when they visited Stark Industries. Immediately suspicious, he investigated them and later followed Savin to an exchange with another man. He tried to interfere and gather evidence when he noticed some of the man's flesh glowing in an amber hue, but Savin blocked him. Their altercation was interrupted when the other man exploded, killing several people and severely injuring Happy. Happy was able to point to a vital piece of evidence before he lapsed into unconsciousness, an act that gave Tony Stark a valuable clue into cause of the explosion.

Happy was put in a coma for some days, which prompted Stark to publicly threaten the Mandarin, the terrorist responsible for the attack. Happy ultimately woke up, days after the explosion.[3]

Years later, Happy delivered Peter Parker to Germany so that he, as his superhero persona Spider-Man, could help Tony apprehend Captain America and a few rogue Avengers. Eager for his next assignment, Peter kept in contact with Happy for the next few months and continually updated him with his daily vigilante activities. Happy didn't seem at all interested in Peter's reports, but he'd continually update Stark on Spider-Man's activities.

Happy was promoted to asset management and coordinated the transfer of the Avengers' assets from Avengers Tower to the New Avengers Facility upstate. On the day of the move, an associate of Parker, Ned Leeds, tried warning him about an impending attack, but Happy dismissed it. The cargo plane was indeed hijacked by Adrian Toomes, but with the intervention of Spider-Man, Toomes wasn't able to escape with anything.

Days later, Happy apologized for not listening to Peter and thanked him for saving the plane. He took Peter to the New Avengers Facility, where Tony and Pepper were waiting to officially announce him as a member of the Avengers, but Peter declined. With members of the press awaiting some kind of announcement, Tony suggested announcing his and Pepper's engagement. Happy brought out an engagement ring, but Pepper was unimpressed with the idea.[4]

When Thanos snapped his fingers and dusted half of the universe's population, Happy was among the survivors.[5] Five years later, Bruce Banner resurrected the snap's victims, but Tony perished during the ensuing battle with a past version of Thanos. During Tony's funeral, Happy and James Rhodes comforted each other. Afterwards, Happy comforted Tony and Pepper's daughter Morgan, and when she told him that she wanted a cheeseburger, Happy recalled how Tony loved cheeseburgers and promised to get her all the cheeseburgers she wanted.[6]

At a charity event hosted by Peter's Aunt May, Happy traveled there to meet with Spider-Man. After presenting May a large check, Happy told Peter that Nick Fury was calling him, but Peter "ghosted" Fury, which Happy advised against.

During Peter's vacation in Europe, Happy spent his time in a relationship with May. However, the machinations of former Stark Industries employee Quentin Beck forced Peter to contact Happy for help. After picking up Peter from the Netherlands, Happy went to London, where Beck was staging his ultimate illusion to kill Peter's classmates. Peter made himself a new suit and left Happy's plane to fight Beck, while Happy flew down to ground level to help Peter's classmates Ned Leeds, MJ, Betty Brant, and Flash Thompson. One of Beck's drones destroyed Happy's plane and chased Peter's classmates and Happy to the Tower of London, but Spider-Man defeated Beck and disabled the drone. Back in New York, Peter confronted Happy and May on their relationship, which May claimed was a one-time fling while Happy insisted was a long-term connection.[7]

Harold Hogan is experienced at boxing, and is also a very skilled driver.

Harold Hogan possesses the strength of a man who engages in regular exercise while boxing.

Like this? Let us know!
Retrieved from "https://marvel.fandom.com/wiki/Harold_Hogan_(Earth-199999)?oldid=6074246"
Community content is available under CC-BY-SA unless otherwise noted.