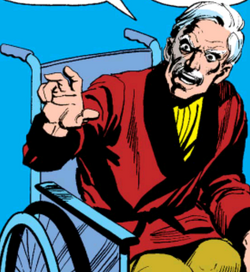 On a snowy expedition near the mysterious city of K'un-Lun, Harold Meacham violently turned on the other three members of his traveling party. Meachum facilitated Wendell Rand falling to this death. Upon killing his former friend and rival, Meachum proclaimed his unspoken love for Wendell's wife Heather. Outraged, Heather Rand and her young son Danny ran from Meachum. However, she was soon devoured by wolves as she attempted to shield and protect Danny. However, young Danny survived, was rescued, and spent his formative years in K'un-Lun, eventually becoming the martial arts master known as Iron Fist.[1]

Returning from the expedition, Meachum became lost and almost froze to death. He was saved by residents of a small village on the bottom of the mountains. However, his legs had to be amputated because they had been damaged too badly. Lying in the village, Meachum learned that Danny had survived and was living in K'un-Lun. Harold Meachum returned to the US, leading the company that he had co-owned with Wendell, preparing for the moment that Danny would return to take his revenge. Ultimately, when the two finally met, Daniel Rand refused to kill Meachum. However, the mysterious Ninja did assassinate Meachum.[2]

Like this? Let us know!
Retrieved from "https://marvel.fandom.com/wiki/Harold_Meachum_(Earth-616)?oldid=5211749"
Community content is available under CC-BY-SA unless otherwise noted.