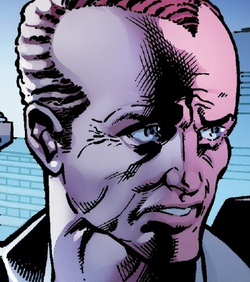 His history is seemingly similar to his main counterpart, but without the sliding timescale. Harry was one of Peter's closest friends, but in 1966, Peter had his father Norman arrested due to his activity as the Green Goblin. This left Harry to be in charge of Oscorp.[1]

In 1977, he was engaged with Mary Jane Watson, but showed signs of a drug addiction brought up by the stress in being in charge and his father's imprisonment. Norman convinced Harry to retrieve his clone from Miles Warren's lab. Harry as the Black Goblin assaulted the lab, but also found clones of Peter and Gwen. Harry was enraged knowing that his father wanted the clone of Peter, since he considered Peter his worthy heir and despite Spider-Man trying to reason with him, Harry destroyed the lab, leaving only the clone of Peter alive. However, Miles revealed that the Gwen that was in the facility was actually the real one, while the one that Peter had married was the actual clone. This filled Harry with guilt and a year later he broke up with Mary Jane and left her a large amount of money before disappearing.[2]

In 1995, Harry unwillingly helped Otto Octavius with studying Peter and his clone, Ben Reilly, but when Otto supposedly discovered that Peter was in fact the clone and Ben Reilly was the original, this sent him mad. He tried to kill them both, but Harry got in the way in front of Peter and sacrificed himself to save his friend. After Octavius ran away, Harry apologized for letting his father and Otto down, but Peter assured him that he didn't as Harry died in his arms.[3]

Seemingly those of the Harry Osborn of Earth-616.

Like this? Let us know!
Retrieved from "https://marvel.fandom.com/wiki/Harold_Osborn_(Earth-19529)?oldid=6002881"
Community content is available under CC-BY-SA unless otherwise noted.