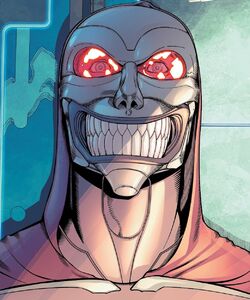 Harry Osborn was a close friend of Peter Parker, who worked at Oscorp, the company of Harry's father, Norman, although Harry was not close to him. When Peter learned that Oscorp was working on inter-dimensional technology that would make the company even more powerful than it already was, he began to fear for his and Harry's lives. Peter wrote Harry a letter blaming Norman for his death and warning Harry he was likely next. Peter had also left him instructions to find the Kobold Suit hidden in the Oscorp Tower. After Peter was killed by Norman, Harry came to retrieve the suit and avenge his friend. He confronted Norman and fired at the unstable Cosmic Cube that Norman was working on.[1]

Kobold Suit: Sturdy, light armor created by Peter Parker for Harry Osborn to take down the crazy, six-armed Spider-Man, Norman Osborn. Designed with retractable claws and flight discs, as well as laser guns able to fire from his wrists, that can cause a large amount of damage or stun, depending on how Harry has them set. The suit’s helm has a heads-up display that can be used to identify and analyze people or hack into networks, as well as a variety of other things.[1]

Retractable knives on forearms and wrists. Throwable, small explosives and knives. Reflecting discs. Gloves laced with wires that can discharge as much electricity and as many zaps as Harry wishes. Concussive, incendiary, and other specialized explosives.[1]

Flying Discs: His flying discs can be thrown and jumped onto, fitting the base of the feet and used to fly in any direction. The sides not on the feet are lined with a material similar to the reflecting discs, and can be used to reflect any projectiles.[1]

Like this? Let us know!
Retrieved from "https://marvel.fandom.com/wiki/Harold_Osborn_(Earth-44145)?oldid=6001976"
Community content is available under CC-BY-SA unless otherwise noted.