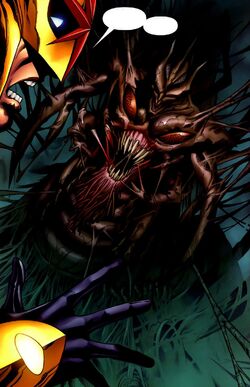 A cosmic entity, the Harrow existed for untold centuries feeding off galactic disasters. It was present at the trial of Galactus, possessing one of the audience. It stole aboard Galactus's Worldship (Taa II), hiding in its cone of Psilence, realizing that the Eater of Worlds was the perfect host for itself. The Harrow kept its existence hidden with powerful psi-shields.[2]

On the planet Orbucen, where Galactus began to harvest, the Harrow began possessing various people to cause more chaos. However, Richard Rider, the last Nova Centurion, assisting with the planetary evacuation, discovered the Harrow and began fighting it. Rider managed to expose the parasite to Galactus by disrupting its psi-shield. Galactus then incinerated the Harrow.[3]

Like this? Let us know!
Retrieved from "https://marvel.fandom.com/wiki/Harrow_(Earth-616)?oldid=5720721"
Community content is available under CC-BY-SA unless otherwise noted.