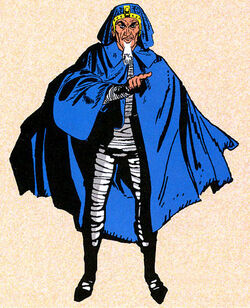 Pharoah Hatap was a Pharaoh in Ancient Egypt who rebelled against Cleopatra but he started to loose he used his knowledge of the dark arts he placed himself in suspended animation and was placed in a tomb. He was discovered in the modern era by Iron Man and decided to use the future technology to go back in time and defeat Cleopatra. To force Stark to help him, Hatap afflicted the other workers with a disease which would spread across the Earth, unless Stark agreed to return with Hatap to his era, help him defeat Cleopatra. To travel back in time he summoned the "Chariot of Time" and the pair traveled to ancient Egypt. Once in the past, Stark changed into his armor, and tricked Hatep into thinking he was a monster that had killed Stark and fled. He started to reassemble his army and marched on Cleopatra, but was confronted by Iron Man. Hatep attempted to flee to the future, but was stopped by Iron Man, and fell on his sword seemingly killing him.[1]

Black Magic: Hatap possessed a knowledge of sorcery, the extent of which is largely unknown. He created a potion to place himself in suspended animation for more than two hunderd years. He cast a spell of sickness across a group of workers.[1]

The Chariot of Time was a golden charm that allowed Hatap to travel to other time periods by rubbing it twice.[1]

Like this? Let us know!
Retrieved from "https://marvel.fandom.com/wiki/Hatap_(Earth-616)?oldid=5432645"
Community content is available under CC-BY-SA unless otherwise noted.