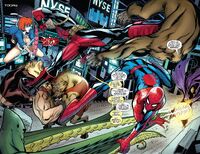 The Hateful Hexad was a group of small-time villains who decided to band together in order to rise to prominence. They confronted Spider-Man and Deadpool in Wall Street three days after their formation.

Not only were the members of the team easily dealt with, but a new vilainess named Itsy Bitsy interfered in the fight and nearly killed most of them as a display of power for Spider-Man and Deadpool.[1]

Retrieved from "https://marvel.fandom.com/wiki/Hateful_Hexad_(Earth-616)?oldid=5723406"
Community content is available under CC-BY-SA unless otherwise noted.