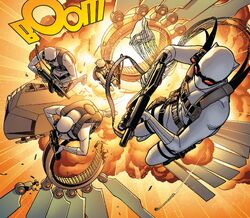 The Hatut Zeraze were the secret police of Wakanda responsible for imprisoning, torturing, and exterminating the domestic and external political enemies of Wakanda until they were exiled by T'Challa, the Black Panther. They then became freelance mercenaries, but remained loyal to Wakanda.[citation needed]

After Klaw's attempted invasion of Wakanda, Rhino and Black Knight were kept in custody of the Wakandan Security Forces, and extradition demands from the United States of America and the Vatican were denied.[4]

The Hatut Zeraze were used by Shuri as a strike force to assault Atlantis, but both sides were decimated by an alien invasion.[5] They were used many times throughout the Wakandan/Atlantean War,[citation needed] as well as during the events of Infinity.[citation needed] They grew angry with their former king, T'Challa, and when they were given the chance, they accused him of being a coward. It was because of their accusations that Shuri made the decision to banish T'Challa from Wakanda.[6] Some Hatut Zeraze were made into cyborgs and sent to kill Namor; however, the sender is unknown. If it wasn't for the Superior Spider-Man intervening, they would have succeeded in assassinating Namor.[7]

During the Cotati Empyre invasion, White Wolf and the Hatut Zeraze engaged the Cotati archers south of Khartoum.[8]

Retrieved from "https://marvel.fandom.com/wiki/Hatut_Zeraze_(Earth-616)?oldid=5664596"
Community content is available under CC-BY-SA unless otherwise noted.