What do you say about a trip, Lucky? A fancy resort on the way back to New York? Pool time? Probably a trap?

Helping an investigation for Detective Rivera, Kate is irritated by the building name before having to pacify thugs preparing a bank robbery while thinking on her coming to Los Angeles to change herself. Feeling changed herself, Kate believes it is time to return home to New York but not as the Kate Bishop from before apprehending the leader of the robbers, who strangely inspires Kate to take a road trip back to New York and messages America and Cassie about it. At Hawkeye investigations, Kate finds several missed calls from Detective Rivera and a suspiciously nice invitation to stay at Resort Chapiteau before leaving the office to Ramone and Johnny; only for them to catch her and bid farewell.

Kate's contacts chat with her on the plane ride to Resort Chapiteau, where guests are reportedly behaving strangely. Upon arriving, Lucky chases a ball thrown by Susan, Kate's estranged sister, who sent the invite needing Kate's help. Recalling their sour separation with Kate's disconnection to the family and Susan believing she'd fail as a superhero, Susan now is begging Kate's help without their father. Susan arrived two weeks earlier, now separated from David, and found herself covered in scratches without memory of their cause.

Explaining more bizarre circumstances, Kate also finds that the staff include a juggler and some grunts, aggressive when believing Kate didn't belong until Susan placed a fake wristband on her wrist to fool them. As a woman screams that her daughter went missing, Kate reveals herself a private investigator and contains the scene. In a hidden observation room, someone asks another if they wish to continue whatever experiment they're conducting, but the one being asked chooses to resume. Seeing Kate on the monitor, the conductor of the experiment voices a one-sided "welcome to the circus" to Kate Bishop on the monitor.

Or at least, back to New York. And as much as she wants to go back to where her friends – her chosen family – are, she's changed since she was last on the East Coast. So she's picked up a pit stop case first. A confidence-booster, to prove to herself she's making the right decision and not going to backslide into her past just by changing time zones. Besides, the case is perfect: Swanky resort? Check. Jewel heist? Check. Almost definitely 100% a trap? Check. Don't miss this exciting new miniseries from New York Times bestselling writer Marieke Nijkamp and artist Enid Balám! 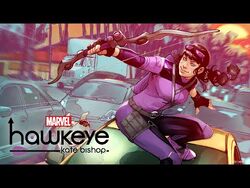