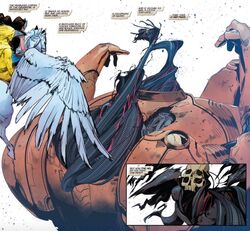 One of the first Celestials to enter into the Abyss left after the destruction of the 6th Cosmos encountered the dark elder god Knull and picked him up to examine him. Enraged over the Celestials despoiling the Abyss through their creation of the 7th Cosmos, Knull manifested a blade of living abyss from his shadow and decapitated the Celestial,[1] thereby marking it as the first death in the renewed Multiverse.[2]

Adrift Through the Ages

Knull was exiled back into the darkness by the other Celestials, but used the Celestial's severed head as a forge to refine his blade into All-Black the Necrosword,[1] creating a metaphysical connection between the primordial symbiote and the slain cosmic god. Over time the Celestial's severed head decayed and was turned into a mining city and space station called Knowhere, while its decapitated body was left to drift through space and time until it eventually crossed into the Realm Between.

There, the Headless Celestial's body attempted to fulfill its programming by creating a world within itself, but its sundered and corrupted soul could only manage to create a twisted afterlife for those killed by All-Black and Knull, torturing them by forcing them to repeatedly relive their deaths and worst memories for all eternity. Over the millennia the Headless Celestial trailed after Knull - and presumably Gorr and the other wielders of All-Black as well, at least while Knull was imprisoned - assimilating the souls of those slain by the Necrosword and in return providing it and its wielder with power, thereby making them nigh-invincible.[2][3][4]

At some point millions of years in the past, Rūna, one of the original nine Valkyries, encountered the Headless Celestial while transporting the soul of her lover Alta to Valhalla, and both of them were devoured by it, separated within the sea of lost souls trapped inside the Celestial, and trapped in a series of nightmarish visions - among them being forced to relive the events of Alta's death.[5] The Celestial's severed head was destroyed when it was sucked into a black hole untold millennia later,[6] but its body remained intact within the Realm Between and once Knull was freed it resumed following him and consuming the souls of those he slew.[2]

The Headless Celestial has been corrupted by its death and metaphysical connection to All-Black. As such, it serves as a twisted afterlife for the souls slain by the Necrosword, feeding the primordial symbiote power while torturing them by forcing them to relive their deaths and worst memories over and over.[2] When confronted by Jane Foster, it expressed the desire to regain life and offered what it thought was her heart's desires in exchange. When she rejected its offers, it was confused and indignant, petulantly refusing to let go of the souls it had collected, but was ultimately convinced to do so and pass on by Jane's advice.[8]

Seemingly those of a standard Celestial.

In-life, the Celestial could fire blasts of cosmic energy from its hands.[1] In-death, the Celestial relies on the vengeful souls it has consumed to fight off would-be attackers.[7]

Like this? Let us know!
Retrieved from "https://marvel.fandom.com/wiki/Headless_Celestial_(Earth-616)?oldid=6669440"
Community content is available under CC-BY-SA unless otherwise noted.