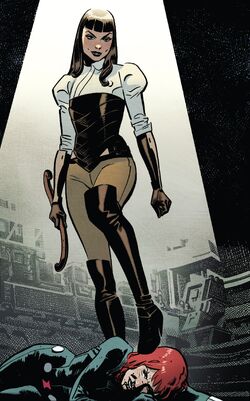 You don't have a story, little one. You're simply a footnote in mine.

Anya was the daughter of the Red Room Academy's custodian, the Headmistress. She was the only girl in her care who didn't train, for which she became known as the Recluse. Anya attempted and failed several times to gain the recognition of the Headmistress' pupil Natasha Romanova, whom Anya's mother favored above the rest. These two factors caused Anya to resent Natasha.[2]

Many decades later, Anya had set out to excel Natasha in every aspect. She forced her mother to train her in order to become Natasha's equal. Together with the former Headmistress, Anya founded the Dark Room, a new school for child assassins. Natasha, now known as the Black Widow, came across the Dark Room while looking for old files on the Red Room on behalf of the Weeping Lion, who was blackmailing her. The files were given to Natasha willingly, as they were of no use for them, and Natasha's procurement of the files ensured she could live another day to confront Anya.[1]

After having turned the tables on the Weeping Lion and getting him to work for her, Natasha tracked down the Dark Room, which had moved its operations to Greenland after Natasha had first found them. When Natasha infiltrated the Dark Room, the Headmistress and Recluse revealed that they had dispatched all of their trainees in various mission so they would be out of Romanova's reach to rescue them. Natasha ordered the Weeping Lion to use his telepathic powers to get information on the pupils directly from Headmistress. In order to prevent the psychic intrusion from being successful and to keep her secrets under wraps, the Headmistress shot herself in the head.

When Weeping Lion intruded Anya's mind, he claimed that she didn't know anything about the Dark Room's operations, prompting her to question his answer, astonished. When Anya pulled Headmistress' gun on Natasha in response to Lion's claim that she was also actually afraid of Natasha, Black Widow called her bluff and snatched the gun from her hands, leaving her cradling her mother's corpse as she swore revenge.[3]

Some time later, Recluse tried to get revenge on Black Widow, attacking her former mentor Iosef and gunning him down, and also capturing the Winter Soldier, who had been following Natasha to keep an eye on her. Recluse confronted Natasha at Iosef's cabin, but she escaped with Barnes due to knowing the place's secrets and trap doors. Black Widow and Winter Soldier proceeded to fight Recluse, forcing her to flee.[4]

Recluse later tracked down five of the Dark Room's pupils, who had been captured by the Weeping Lion's cousin most likely after Lion had probed Anya's mind and claimed she didn't know anything, when in reality she did.[5] Paired with her pupils, Anya attacked a S.H.I.E.L.D. base located in Antarctica named Friendship which played a key role in maintaining the integrity of the entire organization. Black Widow attempted to stop Anya's six pupils from stealing the set of keys held by the base's staff necessary to activate its self-destruct mechanism, but failed and was ultimately confronted by Anya herself, who had taken up the mantle of Headmistress.[6]

Headmistress held Natasha by the neck with a wire and presented her with an ultimatum, she either killed one of her pupils before they could turn the keys at the exact same instant or S.H.I.E.L.D. was destroyed. Black Widow distracted Anya by shooting a sting from her gauntlet at the clock they were using as reference to turn the keys and slipped away, running to a switch and activating the base's emergency flooding. When Natasha emerged from the current, she was confronted by Headmistress' pupils, and tried to convince them to deflect their master, arguing she truly didn't care for them as she was willing to force Natasha to kill one of them. Headmistress emerged shortly after and tried to drown Natasha's words. The girls let them fight, releasing the platform where they were standing into the water current. Headmistress and Natasha continued fighting, and Natasha let Anya fall to her death when they reached the pipe's end. However, she survived and followed Natasha to the upper levels of the base where she had reunited with the pupils. When Anya prepared to fight Natasha, Black Widow walked away to let the pupils decide whether they helped or turned against Headmistress. Anya failed to convince the pupils to return to her side, and they beat her up, later taking her outside the base, where she was detained by S.H.I.E.L.D.[7]

Later she was free again through unknown means and started to stalk Natasha and set her up by killing relatives of Natasha's previous supervisors. Seeing Natasha in conflict with her friends due to Anya's own actions, she finally confronted her, thinking she was alone. She also revealed that she had manipulated Natasha's cloned body so that she would start to lose her memories. It turned out that Anya herself was set up so that Natasha could learn the reason behind her memory loss, and that the fights with her friends were staged. In the end, Anya was detained again.[8]

Expert Combatant: According to herself, Anya is the physical equal to Black Widow. When the Weeping Lion read her mind, it was "full to the brim with combat knowledge."[3]

Bilingual: Headmistress is fluent in both Russian, her mother tongue,[1] and English.[3]

Like this? Let us know!
Retrieved from "https://marvel.fandom.com/wiki/Headmistress_(Anya)_(Earth-616)?oldid=6132461"
Community content is available under CC-BY-SA unless otherwise noted.