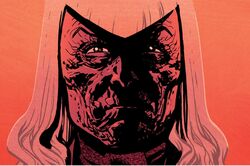 A scar is not the mark of a mistake made, Natasha. It's another lesson-- That you are stronger than whatever it is what gave it to you.

Many decades later, the Headmistress grew old and started working with Anya on a much more extreme version of the Red Room, the Dark Room Academy. Natasha encountered Anya and the Headmistress when looking for old files on the Red Room on behalf of the Weeping Lion, who was blackmailing her. The Headmistress gave Natasha the files willingly, as they were of no use for them, and Natasha's procurement of the files ensured she could live another day to confront Anya.[2]

After having turned the tables on the Weeping Lion and getting him to work for her, Natasha tracked down the Dark Room, which had moved its operations to Greenland after Natasha had first found them. When Natasha infiltrated the Dark Room, the Headmistress and Recluse revealed that they had dispatched all of their trainees in various mission so they would be out of Romanova's reach to rescue them. Natasha ordered the Weeping Lion to use his telepathic powers to get information on the pupils directly from Headmistress. In order to prevent the psychic intrusion from being successful and to keep her secrets under wraps, the Headmistress shot herself in the head.[3]

Like this? Let us know!
Retrieved from "https://marvel.fandom.com/wiki/Headmistress_(Red_Room)_(Earth-616)?oldid=5609509"
Community content is available under CC-BY-SA unless otherwise noted.