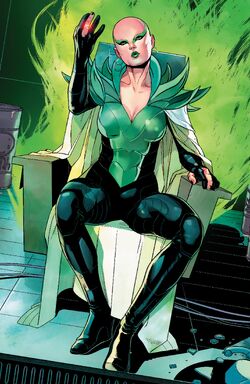 After Gamora donned the identity of Requiem and set out to collect the Infinity Stones, Moondragon and Phyla-Vell traveled to the neighboring universe of Earth-616 to retrieve their universe's Reality Stone, as each version of this artifact across the Multiverse had become displaced to an adjacent universe. They confronted Star-Lord and the Collector, who handed over the Reality Stone to Phyla-Vell for it was useless in their universe.[2] Moondragon eventually hid the stone and erased her memories of the event.

Requiem captured Moondragon and Phyla-Vell before killing Loki Odinson and taking the Infinity Stones in his possession for herself. Moondragon tricked Gamora into reading her mind for the Reality Stone's location, allowing her to lock Gamora in mental combat. Phyla-Vell hesitated to strike since it would have been harmful for Moondragon to be connected to Gamora's mind when she killed her. Their window of opportunity closed, and Gamora prepared to reassert control after learning the location of the Reality Stone. Since their universe was now doomed, Moondragon took advantage of her connection to Gamora before it was broken to make her use the Infinity Stones to shoot herself and Phyla-Vell out of the universe and into Earth-616 to escape Requiem.[3]

The couple arrived at the Quarry of Creation, where Earth-616's Gamora was trying to dig through an unbreakable barrier. They attacked Gamora in retaliation for the actions of her counterpart from their world, but their attacks were deflected without effort. After Loki and his Cosmic Avengers confronted Gamora and defeated her, the trickster god pulled Gamora through a portal to Soul World, accidentally taking Moondragon and Phyla-Vell with her. They joined forces with Adam Warlock and his allies to fight Gamora.[4] The Cosmic Avengers then returned to Soul World to stop the monstrous Devondra and change Warp World back into the real world. When they all returned to the real world, Moondragon and Phyla-Vell tried to kill Gamora, but Star-Lord convinced them not to. After Warlock used the Soul Gem to give the rest of the Infinity Stones their own souls and they fled away, all parties involved in the conflict parted ways. Moondragon and Phyla-Vell left to explore the new universe they would inhabit from then on.[5]

At the reading of the last will and testament of Thanos, in which the Mad Titan posthumously revealed his consciousness would soon take over the body of another, several cosmic heroes were sucked into a black hole the Black Order opened as they tried to recover their former master's body for Hela, the Asgardian Goddess of Death and Thanos' former lover. Moondragon and Phyla-Vell were among the heroes rescued by the Silver Surfer, and subsequently recruited into the Guardians of the Galaxy by Star-Lord.[6][7]

Knowing Eros would try to kill Gamora for believing her to be the intended host for his brother's consciousness, the Guardians tracked her down in order to protect her from the incoming threat. However, the team of Dark Guardians assembled by Eros managed to defeat them and took Gamora away. With the help of Lockjaw, the Guardians launched a rescue mission only to find the Dark Guardians already defeated. Gamora told them Hela had taken Eros, the actual intended host for Thanos' consciousness, to Knowhere so the Mad Titan could be fully resurrected. Not long after, the two teams joined forces and succeeded in preventing the return of Thanos.[8]

When the Universal Church of Truth from an alternate future captured their teammates, Moondragon and Groot formed a ragtag group of Guardians with the dying Rocket Raccoon and the Magus to rescue them.[9] They invaded the Church's flagship and defeated the Destroyer Horde, an army of Drax clones the Church had created to kill Death in their future,[10] but the mind-controlled cosmic warriors of the Church captured them soon afterwards. Rocket, who was thought dead after the destruction of his life-support mech suit, later managed to set them all free while also programming the Church's ship to jump back to its original timeline. Using her powers to collect fragments of memories related to Drax from everyone present, Moondragon gave one of his clones a consciousness of his own before they left the ship with her teammates and the other cosmic warriors.[11]

Following a disastrous mission against the reborn Olympians that got Star-Lord presumably killed,[12] a grief-stricken Gamora formed her own team of mercenary Guardians and accepted to take the original Guardians down for Castor Gnawbarque III. Moondragon knew that her Earth-616 counterpart was part of Gamora's team and that she was manipulating events so the two would meet, thus she did the same on her end to make the confrontation between the two teams happen. After defeating her counterpart in a duel of the mind, Moondragon merged with her to share everything she had.[13]

Once learning that her wife had merged bodies with a complete stranger, Phyla-Vell expressed her frustrations to this new composite Moondragon, about how she wasn't consulted by her wife first.[14]

Seemingly that of the Moondragon of Earth-616.

Like this? Let us know!
Retrieved from "https://marvel.fandom.com/wiki/Heather_Douglas_(Earth-18897)?oldid=5794371"
Community content is available under CC-BY-SA unless otherwise noted.