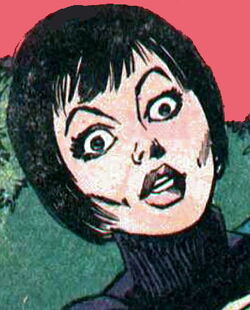 Heather was the flighty fun loving former girlfriend of Matt Murdock. The socialite was quite a contrast for the solemn crime-fighter, but helped him finance his "Legal Storefront Clinic" through her father Maxwell Glenn[1], who was president of Glenn Industries. Murdock uncovered a criminal conspiracy involving her father, who was under the control of the Purple Man. Despite the efforts of Murdock's alter ego, Daredevil, who tried to find evidence to exonerate him without exposing his secret identity, Heather's father committed suicide.[2] Murdock had feelings of guilt and failure, but he eventually tired of Heather's partying ways and her abuse of alcohol. Murdock and Glenn eventually ended their relationship,[3]

Heather briefly dated Anthony Stark. At the time, both Stark and Glenn were heavily involved with alcohol abuse.[4] In one party with Stark, Heather met Tarkington Brown and revealed him Daredevil's secret identity, leading to Daredevil and Brown directly being opposed.[5]

Like this? Let us know!
Retrieved from "https://marvel.fandom.com/wiki/Heather_Glenn_(Earth-616)?oldid=6171525"
Community content is available under CC-BY-SA unless otherwise noted.