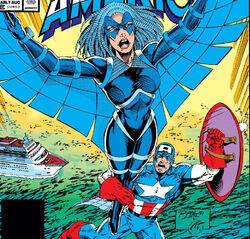 Heather O'Gara was a Hulk villainess who was allied with the Leader who had mechanical wings and an array of weaponry at her disposal.[1][2]

She would later join Superia's all-woman criminal team the Femizons, and reached a position of some responsibility, as one of her captains. When Captain America and Paladin investigated the team, Blackbird was defeated in battle by Captain America.[3][4]

Blackbird's costume was equipped with mechanical wings that enabled her to fly. She was able to carry another person with her when she flew, even someone heavier than her like Captain America or weighed down in armor like Iron Maiden.

Blackbird's costume came equipped with steel grappling claws and cables that she could use to ensnare an opponent.

Enemy of the Hulk and Captain America.

Like this? Let us know!
Retrieved from "https://marvel.fandom.com/wiki/Heather_O%27Gara_(Earth-616)?oldid=5407785"
Community content is available under CC-BY-SA unless otherwise noted.