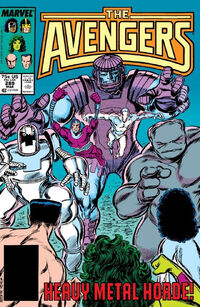 Origin
A team of robots put together by the Adaptoid, because they were logical beings and easy to control.

After being held captive for months, the Super-Adaptoid was freed by the Fixer and set out to get his revenge on the Avengers.

He first recruited the Awesome Android to his cause, and used the Fixer's brilliant technical mind to reprogram him. He then confronted the hero Machine Man and offered to fix his long-lost love Jocasta if he would join his team. Machine Man accepted, and they went to the panhandle of Texas and reprogramed Sentry and then the TESS-One robot, adding them to the team.

Heavy Metal then went to Hydrobase and attacked the Avengers who dwelled there, battling the She-Hulk, Sub-Mariner, Captain Marvel, and Marrina. Unknown to the other members of the team, the Adaptoid was merely looking for information on the Cosmic Cube. He found the information he needed and summoned Kubik, a cosmic being that evolved from the cube.

Meanwhile, the other members of the team began to lose one by one, except for Machine Man, who switched sides and joined the Avengers to fight the Adaptoid after he copied Kubiks powers and became almost omnipotent. The Adaptoid eventually lost the battle, and the androids and robots were sent to a secure location.[citation needed]

Retrieved from "https://marvel.fandom.com/wiki/Heavy_Metal_(Earth-616)?oldid=5547583"
Community content is available under CC-BY-SA unless otherwise noted.