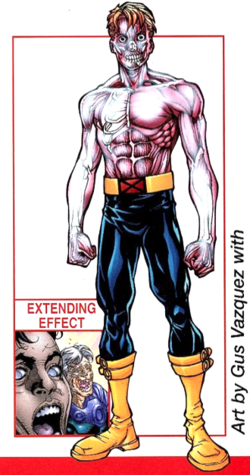 He was on his way to a doctor when a mob attacked him because of his appearance. Fortunately, he was saved by Phoenix.[1] Jean recruited Hector into a new team of X-Men she led to Genosha to rescue Charles Xavier, who had been kidnapped by Magneto. On the way to Genosha, Jean gave Hector a telepathic crash course in using his powers and being an X-Man. During their fight with Magneto, Hector was able to transfer his invisibility field to Magneto, causing him sufficient disorientation for the others to complete the rescue of Xavier.[2]

Despite his pivotal role in the conflict, Hector left the X-Men, in hopes of discovering and learning his abilities on his own.

None, Rendoza is a depowered mutant.

Like this? Let us know!
Retrieved from "https://marvel.fandom.com/wiki/Hector_Rendoza_(Earth-616)?oldid=5447153"
Community content is available under CC-BY-SA unless otherwise noted.