Hector Santiago is a sadistic dictator in South America who rules the country of Rio de Muerte. He is based at a giant prison facility where he tortures it's inmates and keeps his cousin, Donna Maria captive. Eventually, one of his prisoners escapes to the United States of America and Swine sends spies to retrieve him. However, they accidentally kill him and take Captain America instead. On the way there, Captain America breaks free and crashes the plane and escapes. Swine and his men confront him but quickly lose and Steve leaves to go find food, but decides to overthrow Swine after seeing how starved the people are. At the same time, Arnim Zola resurfaces and creates a monster called Man-Fish to kill Captain America. It attacks Captain America but Swine's men chase it away. They then attempt to capture Captain America but he runs away and falls into a pit. Swine then attempts to kill him in the pit, but Man-Fish, who they attacked earlier ambushes and kills Swine.[1] 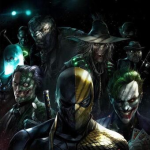