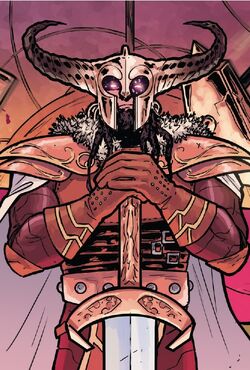 They shall not pass.

Heimdall was a Vanir[9] birthed by nine mothers,[6] the Nine Goddesses[10] (personifying the sea).[3]

He was to be married with Siriana of the Aesir. A special wedding dress was even crafted, impervious to Heimdall's eyes. The Aesir/Vanir War put them apart, but when the war was over, the wedding wasn't made.[11]

At some point, he had a farm, in which the young Warriors Three and Thor stole mutton, only to receive a beating.[12]

Guardian of the Bifrost

Heimdall was a valiant Asgardian warrior. After another attempt by the Storm Giants to storm Asgard, Odin decided to chose a warrior to guard the Rainbow Bridge Bifrost which connects Asgard (Home of the Aesir) to Midgard (Earth). He invited three warriors to prove their prowess, Agnar the Fierce, Gotron the Agile and Heimdall. Heimdall was chosen because of his powers of perception, being able to see and hear across time and thus predicting a coming attack by the Storm Giants. After the attack was repulsed and their King captured, Odin chose Heimdall to be the guardian of the Rainbow Bridge forever.[13]

His first known failure as guardian of Bifrost came when the air spirit Vanna, who was considered unable to be caught, slipped by him on its mission to spy on Asgard for Brimer, King of the Storm Giants. Heimdall was so ashamed of his failure that he reported it to Odin at once, enabling the All-Father to catch the spy.[14]

After Thor reappeared on Earth in the human guise of Don Blake, Heimdall accidentally freed Loki from his imprisonment in a tree. Odin had decreed Loki would remain imprisoned until another Asgardian would weep a tear for him. When Heimdall passed under the tree, Loki made a leaf fall, striking Heimdall in the eye, shedding the required tear.[15]

When Loki was returned to Asgard, Odin decreed he could not leave Asgard again, but turned into a snake and snuck through Heimdall's legs undetected and returned to Earth again.[16]

When Thor had been tricked into turning evil by Loki and returned to Asgard to free him, Heimdall was the first person to greet Thor, but was insulted and Thor barged past him. Sensing something was wrong Heimdall immediately went to inform Odin.[17]

Heimdall has continued to stand as guardian of Bifrost often serving as the first line of defense. He has battled against Thor the times the latter has been banished from Asgard only to be quickly overwhelmed. Other times he has fought beside Thor against threats to Asgard. At one time he served as ruler of Asgard when Odin was in the Odinsleep.[18]

After one of Surtur's attacks on Asgard, Bifrost was destroyed. Heimdall used his free time to form a romantic relationship with Amora the Enchantress. Despite their mutual affection for each other Heimdall returned to his position as guardian of Bifrost when it was repaired.[19]

Following the return of Asgard after Ragnarök, Heimdall was the first Asgardian Thor found. Using his powers, Heimdall was able to easily lead Thor to his fellow Asgardians. When Thor was banished for killing Bor, Heimdall served as one of the advisers to Balder.

He foresaw the attack on Asgard by Norman Osborn, but was prevented by Loki from warning anyone. He fought against Osborn's forces and later resumed his position as watchman of Asgard.[20]

After Thor died fighting the Serpent, he was replaced in everyone's memories by Tanarus thanks to a spell cast by Karnilla. Heimdall became suspicious when he was occasionally unable to locate Tanarus with his enhanced sight. He confronted Tanarus only to be severely beaten. He recovered enough to see through the spell and warn the All-Mother of Ulik's treachery.[21]

When the Mangog resurfaced, Heimdall witnessed his arrival and stood as the first line of defense against the creature to protect Asgardia.[22] Mangog broke Hofund in half and gouged out Heimdall's eyes with its teeth.[4] Heimdall was tended by his fellow Asgardians when they evacuated the city and fled to the Moon while Jane Foster killed Mangog.[23]

After the War of the Realms had concluded, Heimdall's eyesight had healed and had his sword returned to him by Daredevil.[24] Sometime after this, Heimdall travelled to Midgard with Jane Foster, the new Valkyrie, to help her look for Dragonfang, the sword of the previous Valkyrie, which had been stolen by an unknown assailant. During the search, Heimdall was stabbed in the chest with Dragonfang by Bullseye.[25] Despite this, Heimdall managed to survive long enough to convince Valkyrie to let go of the sword, and so she destroyed it and finally defeated Bullseye. Despite this, Heimdall's wounds were still fatal, and he ultimately died.[26]

Heimdall possesses all the typical superhuman attributes common to the Gods of Asgard:

Superhumanly Acute Senses: Heimdall's post as Sentry of Asgard is due in large part to his extraordinarily acute senses. Heimdall's sight, hearing, and smell are enhanced to the point that they qualify as extrasensory. Heimdall can see and hear as far as creation.[27] He can look across time and space[28] and is able to detect the approach of most beings within hundreds of miles. Heimdall can sense the life force of Asgardian gods throughout the Nine Realms and can willingly focus his senses on certain sensory information and selectively block the rest of it from his consciousness.[3] Otherwise, he would be mentally and physically overwhelmed by the extraordinary amount of input generated by his extremely acute senses. Certain magical spells can block his sensory powers and his sight is limited if his eyes are damaged.[5]

Avatar Projection: Heimdall has the ability to project an avatar of himself to converse with Thor from Broxton to Manhattan.[29]

Heimdall's senses, as extraordinarily acute as they are, can be blocked by certain magical spells. Also, just as any other being with superhuman senses, his senses can be taken advantage of if he hasn't toned them down enough. For example, when the Hulk intentionally struck the Bifrost bridge while fighting him after knowing about his superhuman senses, he was stunned by the noise produced, leaving him defenseless to prevent himself from being sent flying from the shockwaves created by the blow, which had created ripples across the Bifrost Bridge.[30]

He carries the Gjallerhorn, used to signal when he sees any impending attacks on Asgard.

Hofund: Heimdall carries an uru sword enchanted by Odin.[31] With his sword Heimdall can command cosmic forces into his sword to strike down a half powered Thor from entering Asgard,[32] he can also use his sword to wield blue flames from countless cosmic stars,[33] and the ability to mystically disguise himself as a mortal human while he was on Earth.[34]

Like this? Let us know!
Retrieved from "https://marvel.fandom.com/wiki/Heimdall_(Earth-616)?oldid=6510068"
Community content is available under CC-BY-SA unless otherwise noted.