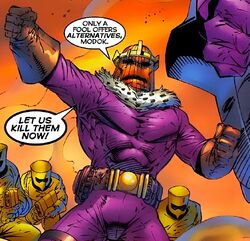 When the Fantastic Four and the Avengers sacrificed their lives to destroy Onslaught, Franklin Richards, the son of the FF's Mr. Fantastic and Invisible Woman subconsciously created a pocket universe to save their lives. There they spent an entire year reliving living new lives "reborn" into a reality where they had only recently gained abilities that vaguely mirrored how they gained their powers originally.

Franklin created populated new universe which included recreations of many heroes, allies, and foes. Among these creations was one based on Captain America's wartime foe Baron Zemo. Although this pocket universe was instantly created, its inhabitants were given memories that pre-dated the creation of this reality.

Heinrich Zemo of this pocket universe was a Nazi operative during World War II and worked with the Red Skull and battled Captain America during the war. Sometime after the war ended, Zemo sired a son Helmut.

In modern times, the Baron joined forces with AIM and M.O.D.O.K.. On an unspecified mission, Zemo, M.O.D.O.K. and an army of AIM soldiers attacked the S.H.I.E.L.D. Helicarrier, only to be met with opposition from Captain America, his new partner Bucky and Nick Fury (really a LMD posing as Fury), and Cable (who was briefly and accidentally transported to Franklin Richard's pocket dimension from Earth-616.) Following this defeat Zemo disappeared for quite some time.

In his absence, Franklin Richards visited this pocket dimension and helped the heroes he had put there return to their native Earth-616. Shortly thereafter the planet was pitched into total chaos by the Dreaming Celestial. This Earth was partially stabilized by a returning Dr. Doom and was transported to the opposite side of the sun from the Earth in reality-616 and was rechristened Counter-Earth.

With the world in chaos, Zemo gathered a group of mercenaries that he dubbed the Thunderbolts. Much like their Earth-616 counterpart this groups origins were rooted in trickery, as Zemo posed the group as helping Germany stabilize the world, however in reality they were secretly attempting to take over the planet for themselves. Zemo recruited the energy weilding Chain Lightning, the tech-savvy Makeshift, moonstone empowered Phantom Eagle (Lloyd Bloch), heat wielding mutant Solarr, and lastly his own son Helmut, the armoured Iron Cross.

In their first recorded mission, the Thunderbolts clashed with Earth's Thunderbolts who were transported to Counter-Earth following a battle with Graviton. The assumption that Earth's version of the Thunderbolts were from Counter-Earth's America and attempting to seize Russian oil assets led to a battle between the two groups, however the battle ended when Moonstone convinced them that they were only checking on Germany's mission to restabilize the planet.

Seemingly those of Heinrich Zemo of Earth-616.

Like this? Let us know!
Retrieved from "https://marvel.fandom.com/wiki/Heinrich_Zemo_(Heroes_Reborn)_(Earth-616)?oldid=5478490"
Community content is available under CC-BY-SA unless otherwise noted.