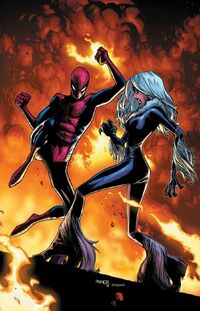 The new leader of the Thieves Guild decided that, with being regarded as myth, the time came for her organization to be publicly infamous once more. To demonstrate their danger, they rob various New York superheroes of their gadgets and equipment. However, the Black Cat opposed this plan of action, and decided to help Spider-Man find the missing items.

Although the duo succeeded, Felicia later confessed that she could not remember Spider-Man's true identity. After explaining the cause being a spell, and feeling guilty for causing such pain in Felicia, Peter unmasked himself to allow her to remember and cancel the spell upon her. Originally horrified when first knowing him once upon a time, Felicia tearfully hugged him.

Retrieved from "https://marvel.fandom.com/wiki/Heist?oldid=6975175"
Community content is available under CC-BY-SA unless otherwise noted.