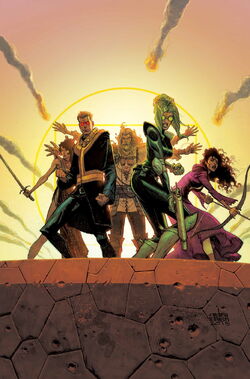 Base of Operations
The Shield, Battleworld, Earth-15513
Affiliations

The Hel-Rangers consisted of exiled inhabitants from other domains due to crimes they had committed and were sent to The Shield forever to guard the rest of Battleworld from the Zombies of the Deadlands, the Ultron Sentinels of Perfection, and the Annihilation Wave of New Xandar.[1]

After another day of work at the Shield, defending it against an attack of Giant Ant-Men Zombies, Commander Brand talked one last time with Leah before she went to venture herself beyond the Shield to try and find her long lost lover Illyana. As Leah left, Kang approached Brand and boasted about his fighting skills and how he would subdue all the south of Battleworld to his will, which angered her. While she was telling him that protecting the Shield wasn't as simple as he thought it was, Kang's wrist began to bleep and his future self suddenly appeared before them. Before fading away, future Kang told them the Shield would fall in twenty days, and that Thanos would doom them all.[2]

Fifteen days later, Commander Brand and her men still hadn't found Thanos. Desperate to find him before he could destroy the Shield, Brand resorted to asking the Unite, robots in love that had betrayed Ultron and allied themselves with the Hel-Rangers of the Shield, to try and find him. But, as they spoke, the Unite detected the powerful army of the Ultron Engine, the greatest threat to ever faced the Shield as it married up the technology of the Ultron Sentinels with the unrelenting energy of the undead, heading towards the Shield. Brand then alerted everyone so they could prepare themselves to battle. As the Vitruvian Man prepared the Enlightment Cannon to shoot, and Kang tried in vain to call chronoallies, Lady Katherine spotted someone on the front line of the Ultron Engine, which to Commander Brand's horror was none other than a monstrous Fury, the presumed dead commander of the Shield.[3]

Under siege and at risk of failing their duty, the Hel-Rangers of the Shield tried everything they could to stop Nick the Fury, as he was the reason why the Ultron Engine was advancing so viciously. With the Endless Summers being reduced to only one-hundred men, and Kang unable to navigate through the timestream thanks to chronomines, Brand sought the help of the Unite once again. One of the Unite tried to use its ability to control robots to make Nick the Fury kill himself, but was killed instead. Using the remaining Unite as a distraction, Kang was able to take Nick the Fury into the timestream and pilot him into every chronomine he could.

Meanwhile, Leah returned with Magik and her brother, Colossus, as well as a demonic army to assist Brand in her battle against the remaining enemies of the Ultron Engine. After the battle ended, Leah and Magik, who had planned since the beginning to hold a subdomain in the Deadlands to rule without submitting to God Emperor Doom, left the Hel-Rangers and returned to the Deadlands. As Brand grieved her army's death, a rift in reality opened above her, with Kang emerging alive, along with Fury's corpse. While they hugged, they were approached by Thanos,[4] who was teleported to the other side of the Shield by Sheriff Strange moments before Doom killed him.[5]

After turning himself in, Thanos revealed he had spent his time organizing the denizens of Perfection, New Xandar, and the Deadlands into an army on its way to destroy the other domains. As the combined efforts of the south attacked the Shield and Brand dealt with it, Thanos told The Thing that Doom had lied to him, and that this world was merely an artificial creation. Knowing this, The Thing rose up to confront Doom, thus removing a massive tract of the Shield and leaving.[6][7]

With the Shield fallen, Kang went back in time to try and prevent the Shield's collapse; meanwhile, Ms. America and Lady Katherine escaped. With the rest of her team dead, Abigail Brand and the last surviving member of the Endless Summers, Major Summers lost their lives standing against the incoming forces of the south.[6]

Retrieved from "https://marvel.fandom.com/wiki/Hel-Rangers_(Earth-15513)?oldid=5557886"
Community content is available under CC-BY-SA unless otherwise noted.