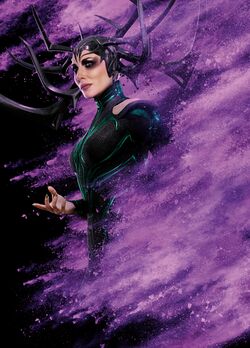 I am Hela, Odin’s first born, Commander of the legions of Asgard, the rightful heir to the throne, and the Goddess of Death. My father is dead. As are the princes. You’re welcome. We were once the seat of absolute power in the Cosmos. Our supremacy was unchallenged, yet Odin stopped at Nine Realms. Our destiny is to rule over all others. And I am here to restore that power. Kneel before me... and rise into the ranks of my great conquest.

The first-born child of Odin, Hela served as the commander Asgard's armies during his conquests of the Nine Realms. However, Odin wanted to become the protector of the Nine Realms rather than their conqueror once his rule over them had been established. Fearful of his daughter's lust for death and destruction, Odin imprisoned Hela in an unspecified pocket dimension and wrote both her and their conquests out of Asgard's history. Before she was sealed away, Hela destroyed all but one of the Valkyries.

Hela remained imprisoned for millennia until Odin passed away after his adopted son Loki exiled him to Earth so he could take his place on Asgard's throne. Shortly before he died, Odin warned Loki and his other son and heir Thor of Hela's return. Once she was free, Hela attacked her younger brothers, shattering Thor's hammer Mjolnir in the process. Loki asked for the Bifrost to return him and Thor to Asgard immediately after seeing Hela's power; however, Hela followed them and continued their fight in the Bifrost. She threw Loki and Thor out of the Bifrost (eventually landing on Sakaar), while Hela returned to Asgard alone.

Hela killed the Warriors Three and countless Einherjar to reclaim her place on Asgard's throne. With her executioner, Skurge, Hela entered her father's palace, broke through the ceiling of her throne room to reveal the record of her and her father's campaign it covered up, and revived her mount Fenris and the Draugr with the Eternal Flame. Heimdall stole the sword that controlled the Bifrost from the observatory before Hela could use it to unleash her armies on the Nine Realms. Hela tasked Skurge and the Draugr with finding the sword and rounding up any refugees fleeing her rule in the city's outskirts. With Hela closing in on them, Heimdall led the refugees to his observatory so they could escape to safety elsewhere, but Hela had Fenris guard the bridge to prevent them from leaving.

Thor and Loki suddenly returned to Asgard with the last Valkyrie, the Hulk, and a ship carrying gladiators from Sakaar including Korg and Miek to stop Hela from conquering the Nine Realms. While the rest of his allies battled Hela's minions, Thor fought his elder sister in Asgard's throne room. Hela again overpowered her brother, this time cutting out one of his eyes, causing Hela to remark on Thor's now physical resemblance with their father. However, Thor unlocked his true potential as the God of Thunder to blast Hela with a bolt of lightning, sending Hela flying from the throne room towards the Bifrost. Thor realized Hela was too powerful to stop even with his new abilities, and realized the only way to end this was to cause Ragnarok. Hela attempted to stop the refugees from leaving Asgard in the Sakaaran ship, eventually killing a repentant Skurge when he betrays her. While she was distracted, Loki entered Odin's Vault and placed Surtur's crown in the Eternal Flame to revive the Fire Demon destined to destroy Asgard. Although she made a desperate attempt to stop him, Hela was killed when Surtur destroyed Asgard to complete Ragnarok.[2]

Like this? Let us know!
Retrieved from "https://marvel.fandom.com/wiki/Hela_Odinsdottir_(Earth-199999)?oldid=6074251"
Community content is available under CC-BY-SA unless otherwise noted.