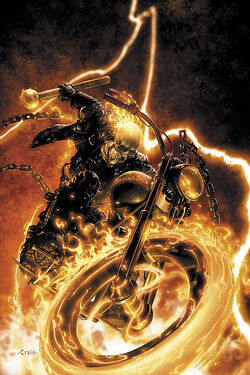 The Hell Cycle is the common mode of transportation of Ghost Riders. It was created by Mephisto as the steed of his bounty hunter the Spirits of Vengeance. It is powered by Hellfire and is not affected by the natural laws of physics.[1]

The Hell Cycle is capable of moving at incredible speeds, moving up vertical surfaces, cross bodies of water and at sometimes capable of flight. The wheels are constantly on fire, which leaves a trail along the road when moving at its incredible speeds. The Hell Cycle will follow the command of the Ghost Rider, even when he is not riding it. The bike will follow his every order.[2]

As his powers as Ghost Rider waxed and waned over the years, John Blaze has occasionally been unable to summon the Hell Cycle. Instead he relied upon the Skull Cycle, a custom made bike with no supernatural abilities.[3]

The motorcycle belonging to Dan Ketch was a solid black back, possessing flaming wheels and had the Medallion of Power as a gas cap. Originally, Dan had to touch the gas cap to transform into Ghost Rider, but he later learned that the power was within himself all along.[4]

When Noble Kale, the Spirit of Vengeance possessing Danny Ketch began regaining his true memories, he changes his costume to one comprised of pure Hellfire, and created a new motorcycle for himself composed entirely of hellfire as well.[5]

After John Blaze fired his Hellfire Shotgun at a motorcycle, it became infused with hellfire, and was transformed into a mystical motorcycle similar to Ghost Rider's motorcycle.[6]

This motorcycle has super-charged turbo thrusters and a camouflage field.

Like this? Let us know!
Retrieved from "https://marvel.fandom.com/wiki/Hell_Cycle?oldid=6544455"
Community content is available under CC-BY-SA unless otherwise noted.