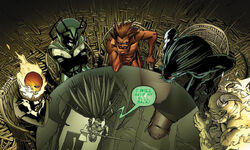 The Hell-Lords are powerful demons each in control of their respective 'Hell' dimensions and are known to use the title of "Satan" to manipulate mortals. From time to time groups of them meet to discuss issues concerning all of them. Many of them have claimed or played off the fear of the idea of "Satan," a single absolute overlord of all evil. Some of their gatherings are even around his throne. Satan has at times been treated as a title for a hell-lord who is able to amass enough power to rule the rest. However, no single hell-lord has ever amassed such power. If there is an actual Satan, none of the hell-lords known have ever encountered him, and some doubt such an entity ever existed at all.[1]

Aqquoonkagua, Dansker, Kx'ulthuum, Xuthl, and others were among the Hell Lords during the Pre-Cataclysmic Age and the Hyborian Age, when the netherworlds were known as Arallu. They eventually lost power overtime.[2]

Darkchilde searched for the missing bloodstone amulet and her Soulsword. She was watched by the Hell-Lords. Everyone except Mephisto was impressed of her. It was then shown that they were summoned by Witchfire. Witchfire revealed that she intended to call the Elder Gods of Limbo using the bloodstones. She then told them to stay away from Limbo so she could conquer it and destroy Darkchilde. Mephisto replied that if she takes back her kingdom, she will be offered a seat and may have a place in their larger goals.[3]

Prelude to the Descent

As the deadline for an event called the Descent, wherein one of the Hell Lords would be chosen to become the new Devil, began approaching, the Hell-Lords began choosing candidates to replace them should they be chosen. Mephisto selected Agent Venom, Red Hulk, and X-23 as potential candidates, bestowing them with Hell Marks.[4] Daimon Hellstrom, himself a candidate due to being Marduk Kurios' son, later possessed Venom with a demon in order to turn the symbiote into one of his Monsters of Evil and make Flash a more legitimate candidate, but the demon was suppressed by the Hell Mark and later revealed that possessing those who bore the Hell Marks had been forbidden.[5] The Venom symbiote, realizing that the demon was beginning to take control of Flash, expelled it and the Hell Mark into its clone, which it bonded to Andrea Benton, turning her into Mania.[6]

Tier Sinclair became the central mover in a war between the various Hell-Lords. The first to kill him would be crowned King of Hell. After Tier was able to kill Pluto, Mephisto decided that the rules were forfeit and turned his attention to his fellows. X-Factor became the last line of resistance and fought the seemingly victorious Mephisto. Strong Guy took the opportunity to kill Tier in the chaos, winning the War and becoming the King of Hell.[7]

When the Thunderbolts were accidentally stranded in Hell, they made a deal with Mephisto to get out in exchange for dethroning the "pretender," who was revealed to them to be Guido.[8] Red Hulk fought against Guido and managed to convince Guido to abandon the position of Hell Lord and try to regain his lost soul, allowing Mephisto to regain the throne and let the Thunderbolts return to Earth. Red Hulk offered Guido the opportunity to return with them, but he preferred to stay until he could regain his soul.[9]

Like this? Let us know!
Retrieved from "https://marvel.fandom.com/wiki/Hell_Lords_(Earth-616)?oldid=5699119"
Community content is available under CC-BY-SA unless otherwise noted.