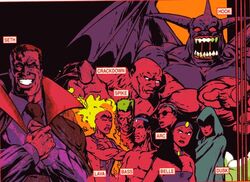 The Hellbent are the result of the intermingling of the remains of elder races with early man during prehistory,[2] when those remnants still shared Earth with early man.

They were shunned both by their human and inhuman sires.

In exchange for the secrets of Thoth, they allegedly swore to him to protect the innocent Hellbent.[1]

As time progressed they became more twisted, forming several lesser groups, among them the Hellbent Prime, Omega and Templar Knights. The Prime were born to very powerful demons and fallen gods, while the Omega were genetically perfect allowing them to mascaraed as humans. The Templar Knights, as they called themselves, were half-human and half-Hellbent capable of accessing the power of the Hellbent through their blood. The Templar Knights started abusing their powers by killing the lesser Hellbent and locking the pure one in a cave, preventing them from diluting their blood. The Hellbent were unaware that they guarded the greatest secrets of the Order of the Templar Knights, that been all the secrets about life, death and magic of the Egyptian god Thoth.[citation needed]

Like this? Let us know!
Retrieved from "https://marvel.fandom.com/wiki/Hellbent?oldid=5837952"
Community content is available under CC-BY-SA unless otherwise noted.