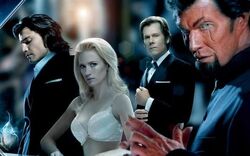 The Hellfire Club was a secret society vying for world domination. They were led by Sebastian Shaw, and his followers included Emma Frost, Azazel, Janos Quested, and later Angel Salvadore.

They were the first adversaries faced by the X-Men. They were instrumental in the Cuban Missile Crisis in 1962 where they were defeated. Erik Lehnsherr killed Shaw and invited the remaining members of the Hellfire Club to join him and Mystique in founding the original Brotherhood of Mutants.[1]

Retrieved from "https://marvel.fandom.com/wiki/Hellfire_Club_(Earth-10005)?oldid=6429695"
Community content is available under CC-BY-SA unless otherwise noted.