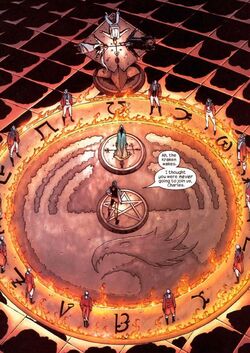 The Hellfire Club was founded by Sir Francis Dashwood in the mid-eighteenth century as the "Order of the Knights of St. Francis of Wycombe" and swiftly gained a reputation for upper-class debauchery and depravity. The club's principles stretched back to Ancient Egypt where a thousand generations of followers worshiped the Phoenix God, an ancient force that the club believed would empower them if they freed it from its many-angled prison. In modern times, the Hellfire Club became a more respectable retreat for the rich and wealthy made up of the most famous names in business, politics, and entertainment, where they could conduct business and hold parties. However, an Inner Circle of thirteen strong was at the center of the Club lead by the grandmaster Sebastian Shaw, who broke off from the Church of Shi'ar Enlightenment, seeing the Phoenix Force as a power of destruction to be freed.[citation needed]

The Hellfire Club kept an eye on Jean Grey, a member of the X-Men, who they believed the Phoenix was reborn into after hearing of her visions of a firebird. Seeing mutants as a possible way of freeing their God, the Club secretly funded Charles Xavier's School for Gifted Youngsters to watch over the young mutant until the Phoenix awoke in her. The Club then lured the X-Men into a trap disguise as a gala in their honor, where they planned to finally release the Phoenix God using Jean as a vessel. However, the ritual the Inner Circle used to release the Phoenix within Jean backfired, and the Phoenix decided to kill most of the inner circle except for Shaw before transferring all Shaw's holdings and wealth to Xavier before murdering in anger for trying to control it.[citation needed]

However, it was not the end of the Club, for Majestrix Lilandra Nermani's assistant, Gerald Lavine, was revealed to be a member of the new Hellfire Club and confirmed that Jean is in fact the reincarnation of the Phoenix. She was part of the later investigation of Xavier's accounts to seize back Shaw's earnings.[citation needed]

Retrieved from "https://marvel.fandom.com/wiki/Hellfire_Club_(Earth-1610)?oldid=5551140"
Community content is available under CC-BY-SA unless otherwise noted.