watch 06:11
What is The Hellfire Club
Do you like this video?
Play Sound 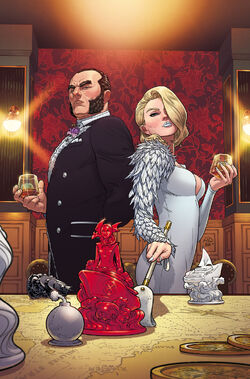 The Hellfire Club (formerly Order of the Friars of St. Francis of Wycombe)[2] began in 18th century England as a social club for the British social elite and wealthy, as a way to provide its members with pleasures that often defied the moral standards of the time and to allow members to consolidate their influence over economic and political matters.[2] The club’s purpose is to obtain and exert power through politics and economic influence instead of outward conquest and domination. Since its foundation, they have been involved in wars and assassinations. The organization is ran by the Inner Circle, this secret group assumed the titles of chess pieces, with the leaders being the respective Black King/White King and Black Queen/White Queen, followed by Black Bishop/White Bishop and Black Knight/White Knight.[13] Membership is hereditary, meaning many of the world's elite are members by birth but many do not accept the formal membership or just attend their lavish parties.[14]

The group was originally founded in England as the Order of the Friars of St. Francis of Wycombe.[2] In the 1770s, the Hellfire Club operated in the Thirteen Colonies. A handful of the most powerful members — led by Sir Patrick Clemens and his mistress Diana Knight — emigrated to the American colonies and began a branch in New York City.[8]

They were headquartered in Philadelphia, Pennsylvania. During the American Revolutionary War they recruited Lady Grey. They hoped to recruit Major General Wallace Worthington who had managed to replace the defector Benedict Arnold. They planned to use Elizabeth Shaw to seduce him a bring him into the club. They hoped to end the "pitiful" American Revolution and assure the victory of the Kingdom of Great Britain. However Worthington continued to establish a reputation for loyalty to the cause. However Elizabeth fell in love with him and decided he was a lost cause. Worthington was murdered and his house burned, leaving behind only his widow.[8]

In 1872, Anton Pierce joined the club and his home Randall House, Boston became part of the chapter. It was later taken over by Donald Pierce.[15]

The club was operating in San Francisco at the beginning of the 20th century. They used psychics to learn more about the birth of "Over-Men", the next stage in human development. They designed a weapon they dubbed the Sentinel to help track them down and destroy them if they get out of hand.[9] The X-Club travelled back in time to collect DNA samples from Doctor Nemesis' parents. When they arrived they learned Dr. Nicola Bradley and his wife Catherine Price had been working on a new energy source. The Hellfire Club kidnapped them to use their energy source to power their proto-Sentinel. The X-Club came to their rescue but the battle between the Hellfire Club's Sentinel and the X-Club caused the 1906 San Francisco Earthquake.[9]

In 1915, after the death of their father, Esau Shaw joined the club alongside Sir Waltham Pierce and Sir Harry Manners, however his brother Jacob Shaw coveted his position. Mister Sinister met with Jacob and gave him the power to shape-shift. He used it to kill his brother to take his place. Union Jack arrested Waltham on the grounds of treason and murder. Eventually, Jacob fled to the US, where his son Sebastian was born.[16]

Throughout the 20th century the recruited the world's leading businessmen such as Howard Stark, Warren Worthington II, John Braddock, and Sebastian Shaw. Many were only interested in the the lavish parties the club threw.[14]

Formation of the Inner Circle

White King Ned Buckman gave the support of the Council of the Chosen to Stephen Lang and his mutant hunting Sentinels. Backing Lang turned into a disaster when a Sentinel attack on Sebastian Shaw's home led to the death of his fiancee Lourdes Chantel. Out for revenge, Shaw and Emma Frost slaughtered the Council of the Chosen. Renaming the ruling body the Inner Circle, Shaw and Frost began to surround themselves with other mutants.[17]

The Hellfire Club first came to the attention of the X-Men when agents of the Hellfire Club kidnapped several X-Men and took over the mind of Phoenix, believing itself to be Jean Grey. Though the X-Men unraveled the Hellfire Club's scheme, the meddling with Phoenix's mind led her to become Dark Phoenix.[citation needed]

They were eventually defeated and Phoenix returned to her Jean Grey persona. Wolverine inflicted nearly lethal injuries on several of its mercenaries during this time. However, the influential organization continued its activities even after being thwarted by the X-Men.[citation needed]

Kade Kilgore, the genius 12-year-old son of Carlton Kilgore, talked his way into control of the club. Using the resources of the club, he assembled a group of similarly privileged young sociopaths: Wilhelmina Kensington, Manuel Enduque, and Baron Maximilian von Katzenelnbogen. They planned for chaos by creating a new generation villainous mutants who would inspire fear and let him sell more Sentinels.[18] However when the Hellfire Academy fell apart, Kilgore was lost, Enduque and Katzenelnbogen were forcibly enrolled in the Jean Grey School, and Kensington was left in control of everything.[19]

While investigating the actions of Miss Sinister surrounding the Mothervine virus, Magneto encountered Sebastian Shaw at the Hellfire Club in London.[20] Having become enhanced by the Mothervine virus, Shaw overpowered Magneto, but a side-effect of the drug caused his body to absorb the energy stored within his own cells, weakening him. Magneto spared Shaw's life in exchange for a meeting with the masterminds behind Mothervine.[21] Some time later, Emma Frost decided to rid of Shaw. She spiked Shaw's wine with a paralytic agent. With no way to release his body's absorbed energies, they overloaded his Mothervine-induced secondary mutation, resulting in his death.[22]

After becoming the new Black King, Emma Frost reformed the Inner Circle and recruited Mystique, Joshua Foley, Marrow, and the Vanisher. They kept the actions secret from the X-Men.[23]

Having become known as the Hellfire Trading Company, the Hellfire Club was welcomed to the living island of Krakoa, where Xavier, Magneto, and Moira X had established a new mutant nation. The Hellfire Club and other villainous and fractious mutants were invited to Krakoa with the purpose of healing mutantdom and starting over as one.[24]

On its first mention in X-Men #129 (January 1980) the Hellfire Club is described as having been founded 150 years ago, and in X-Men #131 the date of 1729 is given. Official Handbook of the Marvel Universe #5 contradicted this by saying the English branch was founded in the 1760s and the New York branch in the 1770s.

Retrieved from "https://marvel.fandom.com/wiki/Hellfire_Club_(Earth-616)?oldid=6534695"
Community content is available under CC-BY-SA unless otherwise noted.