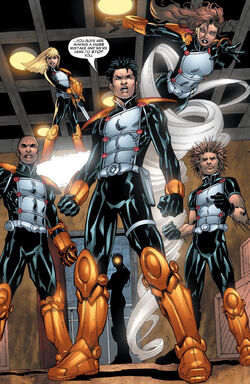 Base of Operations
S.H.I.E.L.D. Helicarrier
Affiliations

The Hellions first mission was to stop Cameron Hodge and his suicide bombers from attacking the New Mutants Leadership Institute.[1]

After successfully completing their first mission, the Hellions were assigned to investigate the Human Liberation Front in Tokyo, Japan. Because her father was suspected of being involved, Surge was temporarily replaced by Magik. Magik's teleportation powers also served as transportation.[2]

While investigating the Human Liberation Front threat, the Hellions discovered the truth about Project Genesis with help from NMLI recruits. Under the suggestion of Dr. Garrison, Emperor Sunfire and S.H.I.E.L.D. sanctioned the experimentation of inducing mutation in baseline humans to force evolution.[3]

After freeing the imprisoned baseline humans, the Hellions and recruits from the New Mutant Leadership Institute went a suicide mission to Emperor Sunfire's Imperial Palace. Magik teleported the human prisoners away and is now the only living member of the Hellions.[4]

Retrieved from "https://marvel.fandom.com/wiki/Hellions_(Earth-58163)?oldid=5547640"
Community content is available under CC-BY-SA unless otherwise noted.