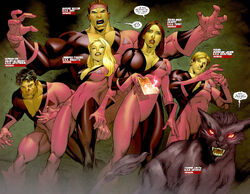 The Hellions were a team of teenaged mutants who were recruited by the powerful telepath Emma Frost and trained educationally and in the use of their powers at her private school the Massachusetts Academy.[1]

Early in the Hellions' existence as a team, three of the members - Roulette, Thunderbird, and Empath decided to take revenge on the X-Men for the death of Thunderbird's elder brother while he was a member of the hero team. Empath used his powers to influence one of Frost's other students Firestar, who was not formally a Hellion, into falling in love with him so that she would help them. During the battle with the hero team, however, Thunderbird realized he was wrong to be seeking vengeance.[2]

The Hellions often clashed with the New Mutants, though the relationship between the teams was often fairly cordial, and even flirtatious in some cases. For a time, the two teams even resided alongside each other. Under the influence of Empath, Magneto sent the New Mutants to Frost's school, but soon recovered and retrieved his students.[3]

A group of villains known as the Upstarts participated in a contest against each other to kill as many influential mutants as possible. The contest was secretly founded by the Hellfire Club's Black Queen Selene to test her fellow Inner Circle members. One of the Upstarts, the insane time traveler Trevor Fitzroy, used his Sentinels to attack and kill Hellfire Club White King Donald Pierce and his Reavers. Trying to escape, Pierce had himself teleported by the mutant Gateway to a party thrown by Emma Frost and attended by the X-Men and Hellions. In the ensuing battle, most of the Hellions were slaughtered, either by Fitzroy himself or his Sentinels. The Massachusetts Academy was abandoned until it was used to train Generation X.[4]

The dead Hellions, along with many other deceased mutants, were later resurrected by Selene Gallio during the events of Necrosha.[5] They launched an attack on Utopia,[6][7] but they were killed by the New Mutants.[8]

Recently the entire squad was once again seen to be active in the newly created mutant only nation of Krakoa and were all presumably resurrected by The Five.

Like this? Let us know!
Retrieved from "https://marvel.fandom.com/wiki/Hellions_(Earth-616)?oldid=5704597"
Community content is available under CC-BY-SA unless otherwise noted.