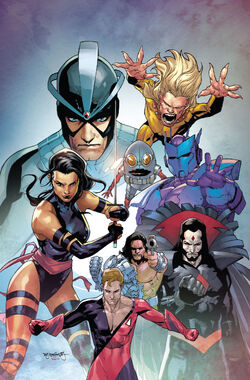 When Professor X established a new mutant nation state on Krakoa, all mutants were granted Krakoan citizenship.[2]. Though most Krakoan mutants rapidly adapted to life in this exclusively mutant society, some proved to be problematic cases to Krakoan authorities. Empath, Orphan-Maker, Nanny, Wild Child, Greycrow, and Havok were mutants considered by the Quiet Council of Krakoa to be pariahs even among their own race, since their hostile and violent behavior constantly led to aggressive interactions with other Krakoans. To solve the problem these mutants posed, Mister Sinister proposed to assign them to a special group in order to channel their unstable attitude into something productive to Krakoan interests. Psylocke was invited by Cyclops to act as a watchdog for the team, since her powers, personality and training were considered to be adequate to handle the group. Sinister's first mission for his new team was to destroy his former orphanage's clone farms. However, the orphanage was the new home of the Goblin Queen, who was in charge of Sinister's former Marauders.[3]

Like this? Let us know!
Retrieved from "https://marvel.fandom.com/wiki/Hellions_(Essex)_(Earth-616)?oldid=6151523"
Community content is available under CC-BY-SA unless otherwise noted.