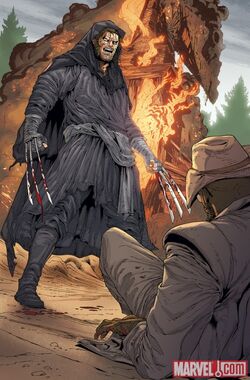 Hellverine was an unnamed powerful Demon from Hell who approached Roger, a man who hated Wolverine and who was blaming him for the death of his wife and their first born child. The demon then told to Roger that if he would join the criminal organization known as The Red Right Hand, the demon would help him get his revenge. Roger agreed and joined the criminal organization. Now a member of the Red Right Hand, Roger and the members of the Red Right Hand sacrificed a man and of woman in order to invoke the demon once again, the demon appeared in the form of a snake and killed the two human sacrifices. The Demon then told them, that it would help them get their revenge for a price.[1]

Later on, thanks to Mystique's help Wolverine was lured inside a van where the leader of the Red Right Hand, the Founder, used another humans sacrifice and an incantation to have Hellverine took over Wolverine's body while his soul was dragged to Hell by a group of demons.[2] Hellverine was then tasked with killing and torturing Wolverine's close friends and offspring, as well as his current girlfriend, Melita Garner.[2]

Hellverine's first target was John Wraith, who was working as a pastor and had just met with Wolverine. He attacked Wraith by covering his body with various bugs and insects, and then stabbed him through the chest. Hellverine then traveled to Wraith's church and sprayed an unknown acid all over the building, and then set the building aflame, burning it down with its congregation inside.[3]

After Mystique learned that Daken and the Red Right Hand intended to trick Wolverine into killing his own children after he escaped from Hell, she decided to betray them.[4] The Red Right Hand then tasked Daken to kill Mystique but he refused as he had other plans in mind for her. He decided to invite her to dinner instead, but during the dinner Hellverine appeared ready to kill Mystique for her betrayal. Daken tried to reason with the demon, but Hellverine burned him to a crisp.[5] Hellverine then faced Mystique and easily defeater her but Mystique was able to escape thanks to the intervention of the police and believed that Daken was dead. But unknown to her it was all of a setup as Hellverine had other plans in mind for Daken and allowed him to live while Daken used this opportunity to disappear making the world believed he was dead, while letting the Red Right Hand finished their revenge against his father.[6]

Hellverine next traveled to Japan to attack Logan's former lover Yukio and his adopted daughter, Amiko Kobayashi. Melita Garner called Yukio to warn her that something wasn't right with Logan and to be careful, but it was too late as Hellverine already traveled to Japan and attacked Yukio and Amiko Kobayashi. Hellverine stabbed Yukio and was about to kill Amiko, but Yukio used her last forces to save her. The duo then jumped through a window an escape this brutal attack. Undeterred by his failure to murder Amiko and Yukio, he decided to travel to Utopia, wearing Wolverine's uniform, and snuck onto the island.[7]

Hellverine then went to Utopia and at some point during his stay on the island (before his presence was revealed), Hellverine encountered Logan's clone, X-23, who recognized that something wasn't right with Logan and avoided him. He continued to pursue her and haunt her dreams, attempting to tempt or coerce her into serving him as "leader of his armies" by claiming she lacked a soul, and expressing pride in her skills as a killer. He failed, however, when Laura refused and defeated him with the aid of what appears to be the Enigma Force, throwing off his influence for good.[8]

While searching his room back in Utopia, he was interrupted by Kitty Pryde and attacked her; she was rescued by Colossus, who knocked him to the ground and tried to reason him, unaware of the demon's possession and thinking that Logan was in his berserk state.[9]

Hellverine kept fighting the other X-Men (Shadowcat, Colossus, Archangel, and Iceman) and manages to get the upper hand. Before Hellverine could kill Colossus, he was captured by Mystique and the Ghost Riders,[10] but not before he injuried Mystique and decapitated one of the Ghost Riders. Suddenly thrown into the Grace Cathedral Church by a Ghost Rider, Daimon Hellstrom performed a ritual to try and bring Logan's soul back from Hell. Thanks to Hellstorm's ritual and his own actions while he was in Hell, Wolverine's soul regained his body.[2]

Daimon Hellstrom could tell something had happened to Logan, but his body was still in turmoil.[2] Furthermore, it seemed one of the Ghost Riders was no longer beheaded. Now outside the church, Logan's body ran, but the X-Men (Cyclops, Magneto, Emma Frost and Namor) were waiting, prepared to finally end this.[2] [11]

Facing Wolverine and the X-Men

As the demon still remained in Wolverine's body, the two beings started battling for control. The X-Men were worried that if Wolverine was allowed to live, more people would be hurt, but Emma Frost and Melita Garner protested, stating that it was necessary for Wolverine to be given the chance to battle the demon. A team of X-Men and friends, all female, was sent by Emma in Logan's mind to assist him.[12]

Meanwhile, Cyclops and the team tried in vain to restrain Wolverine's body in order to stop the demon from hurting anyone else. In the end, it took Wolverine the help of his own memories, Melita, the X-Men, a subconscious projection of Nightcrawler and what appeared to be a vivid memory of Jean Grey as the White Phoenix to burn the demons from his mind and send Hellverine back to Hell.[13]

Like this? Let us know!
Retrieved from "https://marvel.fandom.com/wiki/Hellverine_(Earth-616)?oldid=6561490"
Community content is available under CC-BY-SA unless otherwise noted.