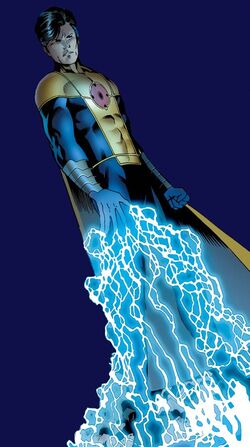 A former actor who portrayed Tony Stark on an unnamed show, Henry Hellrung enjoyed an extremely successful career and friendship with Stark until heavy drinking led to his downfall. Realizing he needed to turn his life around, he entered rehab, then Alcoholics Anonymous. When Tony Stark's drinking became too much, Henry was the man who convinced him to come to AA, and helped him get sober.[2]

During the first superhero Civil War (or just after), he was asked to join and lead California's Initiative team. imbued with "all the power of a supercell thunderstorm" and given the name Anthem, he's been made the Apollo of the team, acting as a rallying point for the group. [2]

During their first mission, against the Infernal Man he led the team to a win, but almost at the cost of Corona's equipment and their two Bannerman robots.[2]

When it was learned that four of the members of the team had gone out drinking after the party, he debated with Stark and co-leader Pepper Potts over whether to fire those members. While he didn't agree with Stark and Potts about the firing, he ultimately accepted it and fired the four members, replacing them with Mulholland Black, Milo Fields, Rebecca Ryan, and Magdalena Marie. [2]

Hellrung continued to lead the team as they came into conflict with various villains, most with a connection to General Softly and the mysterious "M.A.N. from S.H.A.D.O.W." military group, including hordes of Zobos (mechanized zombie hobos), Cold War supervillains, Gamma monsters, Namor, and an all girl gang called the Black Dahlia who had been given superpowers via the same process as The Order by M.A.N. from S.H.A.D.O.W. as well as dealing with a murder case involving a former Order member.[3]

The team was later evicted from its California headquarters and the M.A.N. from S.H.A.D.O.W. was revealed to be a collection of General Softly Androids first devised by the Super Human Development and Operation (S.H.D.O.) fifty year earlier; around the time of the real General Samuel Softly's death, and now part of a collection of villains (including Black Dahlias and Maul) led by the son of Iron Man's old enemy Obadiah Stane. Although Stane's allies were defeated, he escaped and both Heavy and Mulholland Black died.[4]

At the time of the Skrulls Secret Invasion the Order were again functioning as a team, when the Skrull replacement of Dum-Dum Dugan announced to the Initiative teams that all Skrull sleeper agents were to reveal themselves and attack. The Order's members were chosen entirely by Tony Stark, with no involvement from the Skrull posing as Hank Pym, so they were one of only two teams without a Skrull member, though they did not know this. The announcement led Calamity to believe Aralune, as a shape-changer, was the most likely among them to be a Skrull.[5]

Flight, "all the power of a supercell thunderstorm", Enhanced senses, particularly vision.

Like this? Let us know!
Retrieved from "https://marvel.fandom.com/wiki/Henry_Hellrung_(Earth-616)?oldid=5755379"
Community content is available under CC-BY-SA unless otherwise noted.