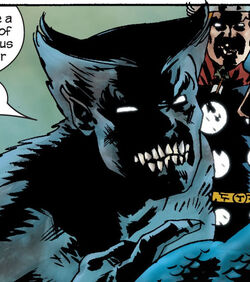 Little is detailed about Beast’s life before the zombie plague arrived on Earth-2149, however it can be presumed that it followed much the same path as prime reality Earth-616's Beast.

Presumably, Beast was at the Xavier Institute when it was attacked, later arriving at the S.H.I.E.L.D. Helicarrier with the other X-Men and Magneto.

Presiding over a motley array of superhumans, Nick Fury declared the situation so dire that it was indeed the end of the world; going on to say that regardless the personal histories of those assembled, they were all now united in the same cause.[1]

Never fully disclosing whether his role was intellectual aboard the Helicarrier or on the ground via his martial skills, at some point, McCoy becomes infected. He and the zombie Reed Richards later head for Xavier Institute, reprogramming Cerebro to search for uninfected humans.

Finding a sizeable stash of meat in Latveria and the surrounding area, they and a horde of their zombified peers lay siege to Castle Doomstadt. A few of them managed to get through the magical force-field protecting the castle, confronting Dr Doom, Scarlet Witch, and Ashley J. Williams. While the Scarlet Witch is bitten by a zombified Punisher, the other two make their getaway.[2]

Presumably, Beast got held up by the risen Deadite Legion, at some point returning to New York. Eventually, his head was blown off by a Power Cosmic-imbued zombie Colonel America.[3]

Like this? Let us know!
Retrieved from "https://marvel.fandom.com/wiki/Henry_McCoy_(Earth-2149)?oldid=6101583"
Community content is available under CC-BY-SA unless otherwise noted.