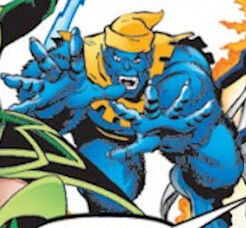 Kreature was Beast altered by Morgan Le Fay's reality distortion wave. The wave caused the time period to be altered to a medieval setting altering the Avengers clothing, speech patterns and thought processes. All of the Avengers involved believed themselves to be a part of the Queen’s elite guard known as the Queen’s Vengeance.

The Scarlet Witch, with the combined willpower of all the awakened Avengers, pumped power into Wonder Man, shifting reality back to normal, and defeated Morgan in the process.[citation needed]

Like this? Let us know!
Retrieved from "https://marvel.fandom.com/wiki/Henry_McCoy_(Earth-398)?oldid=6079988"
Community content is available under CC-BY-SA unless otherwise noted.