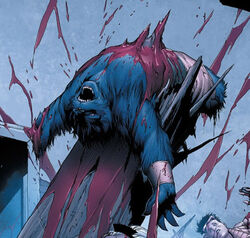 Hank was one of the X-Men that Logan was tricked into murdering by Mysterio when the villains got organized and attacked the heroes all at once.[1]

Hank's body was later stuffed and mounted, then placed in The Red Skull's trophy case in the White House.[2]

Seemingly those of the Henry McCoy of Earth-616.

Like this? Let us know!
Retrieved from "https://marvel.fandom.com/wiki/Henry_McCoy_(Earth-807128)?oldid=5701803"
Community content is available under CC-BY-SA unless otherwise noted.