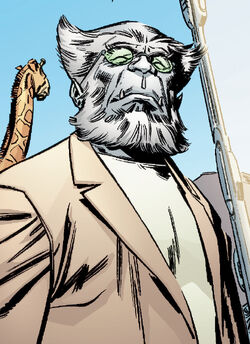 When the Terrigen Mists were released upon Earth-9997, Beast, like many other previously mutated super-beings appeared not to be effected and also continued to age (at this point in his life his fur is now entirely gray.)

At some point the Beast had traveled to Wakanda where he became the science expert for the Black Panther and Queen Storm. He built defenses with the aid of Jamie Madrox to protect the nation of Wakanda as it had become a reserve for the fleeting supply of wild animals that still existed (As meat on Earth-9997 had become scarce.) Later when the Celestial growing at Earth's core caused the redistribution/destruction of Vibranium in Earth's crust, Beast and Madrox developed a device that maintained Wakanda's tropical ecosystem when the rest of Africa became a frozen wasteland.

Later, When the reborn Captain Mar-Vell came to Wakanda with his followers to collect the Cosmic Cube for his quest to destroy Death, Beast was present. He joined the others in defending Wakanda from an attack by the army of Wendigos that began making frequent attacks on the nation of Wakanda.

After it was revealed that Black Panther subconsciously willed the Cosmic Cube to give sentience and human like characteristics to the animals of Wakanda, he and his band eventually began to relocate to the Savage Land with the aid of X-Men in order to escape the Wendigos.

Beast accompanied Black Panther and the X-Men on this mission, and the group succeeded in defeating the Wendigos and establishing a new home in the Savage Land.

Later, after Mar-Vell killed Death, and the people in the land of the living were left to an eternity of suffering with no death, Beast was one of the gathered minds to a meeting to determine how to solve the problem. The group, despite some misgivings, agreed that a new Death had to be created in order to ease the suffering.

Seemingly those of Henry McCoy of Earth-616. It was later revealed that the nature of Beast's mutation (much like all super beings who have had animal like mutations) is in reality a mutagenic regression to a level of evolution similar to human beings before Celestial manipulation.

Seemingly those of Henry McCoy of Earth-616.

The Beast used to have access to the technology of the nation of Wakanda, however the amount of available resources have diminished since the entire nation relocated to the Savage Land. However, Beast most likely has access to the resources of fellow scientists such as Reed Richards at his disposal.

Like this? Let us know!
Retrieved from "https://marvel.fandom.com/wiki/Henry_McCoy_(Earth-9997)?oldid=5288039"
Community content is available under CC-BY-SA unless otherwise noted.