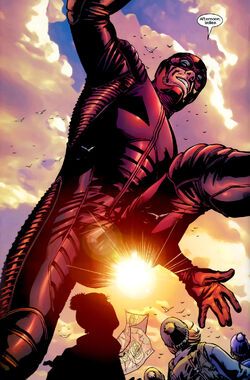 Henry "Hank" Pym was a brilliant, but mentally fragile scientist who was married to Janet Pym, née van Dyne. He was chosen to work on the "Super Soldier Project" for S.H.I.E.L.D. under Nick Fury. Hank was also the superhero "Giant-Man", able to grow to 59 feet and 11 inches (60 feet being the point where the human skeleton cannot support the body's mass). He gained his powers after experimenting on the blood of his wife Jan, who was a mutant.

He was prone to domestic violence. He had been attempting to change, going on a medication, and Jan believed that joining the Ultimates could have been a new start for them. But later the tensions of losing and humiliating himself in a battle with the Hulk, and his jealousy of Jan's "friendship" with Captain America, led into a heated argument between the couple that ended after they had a violent fight, and Janet was hospitalized.[3] Captain America himself took revenge, beat him to a pulp and forced him out of the team.[4]

He was eventually allowed back into the Triskelion, but not as a member of the Ultimates, but rather he served with the staff and acted as a shrink for inmates, including Norman Osborn, Otto Octavius, Maxwell Dillon, Flint Marko and Sergei Kravinoff.

Henry seemed to have overcome his violent streak and was desperate to get in the Ultimates again, becoming the ant-manipulator "Ant-Man" and building two prototype androids, Ultron and Vision II. Despite this, he remained a pariah, becoming increasingly depressed as S.H.I.E.L.D. debuted an entire team of Giant-Men who were capable of breaking the 60-foot "limit" that he had been unable to overcome. Desperate, he joined the vigilante team Defenders, starting a meaningless affair with Valkyrie and making a laughing stock of himself.[5]

In spite of his sad descent, he was able to relate to his estranged wife Jan again, and the two started to see each other again. He was later visited by the Ultimate's traitor Black Widow, but he was too much in a funk to seriously care.

Pym built an army of Ultrons for the Liberators. Pym kept the American populace in line using the Ultron robots he created, not knowing how full scale the attack would be.[6] Later, when the Ultimates started to beat back the Liberators, he ordered the Ultrons to aid the Ultimates claiming it was part of his plan to betray the Liberators the whole time.[7] He was imprisoned in the Triskelion for aiding the Liberators and was put in the cell formerly belonging to the Hulk and Thor.[8]

Later, while under house arrest, Hank was found having overdosed on drugs (later revealed to be not of his own accord but part of Ultron's plan). He saved Janet and Tony Stark from Ultron's robot-replicas of the Ultimates, and later helped the Ultimates defeat the replicas and stopped Ultron himself by tearing his head off. For the help he gave the Ultimates, Pym was let back on the team under the alias Yellowjacket.[9]

However, Ultron's actions caused the deaths of Magneto's children, and in revenge, Magneto flooded the eastern seaboard and froze most of Europe. As a result, millions were killed. The Ultimates' mansion was destroyed, and Pym (in his Yellowjacket persona) was in panic, as he couldn't find Wasp. When Hawkeye and Pym teamed up to find Wasp, Hawkeye spotted the Blob eating her corpse. Pym went into a rage and ripped off Blob's head with his teeth. After killing Blob, and in denial about Wasp's death, Pym took her body to the Triskelion, which was being overrun by an army of suicide bomber made up of Madrox Prime duplicates. Giving Wasp's body to Tony Stark, he told him about an encrypted file he created called "The Jocasta Project". Pym then deliberately allowed the Madrox Prime duplicates to climb onto his body. Pym walked out to sea with the duplicates gripped onto his body, and in his last words, he told Stark that although he had made many mistakes in his life, "this [wasn't] one of them". Believing his sacrifice would make up for his "past sins", Pym was killed in the following explosion.[10]

Giant-Man and his fellow Ultimates were resurrected by the Maker when he rewrote the Multiverse in order to merge all realities into one to help Eternity fight the First Firmament.[11] When the Ultimates from the Prime Earth arrived on Counter-Earth and confronted the Maker for his actions, which were actually giving the First Firmament the upper hand against Eternity, Giant-Man and his teammates were ordered by him to attack the other Ultimates, and kill them if possible. Giant-Man was in a daze as his full memory hadn't returned yet, becoming paralyzed with fear when he remembered how he and Wasp had died. This allowed Captain Marvel to punch him in the jaw. Eventually, the members of both teams realized they shouldn't be fighting each other, and worked together to help Eternity gain the strength to finally defeat the First Firmament. After that, Giant-Man and the other Ultimates decided to travel the Multiverse to hunt down the Maker.[12] Giant-Man later appeared in his reborn native universe together with most of the Ultimates.[13]

Pym can grow up to sixty feet high and can shrink to the size of insect. A natural neurological reflex prevents him from growing or shrinking beyond the limits of his body endurance.

Pym is a cybernetics/robotics genius and genetics expert.

Used self-made equipments for his powers: growing and shrinking his size, ability to communicate with ants. His costume had shaded goggles to protect his enlarged eyes from excess sunlight.

Like this? Let us know!
Retrieved from "https://marvel.fandom.com/wiki/Henry_Pym_(Earth-1610)?oldid=5567253"
Community content is available under CC-BY-SA unless otherwise noted.