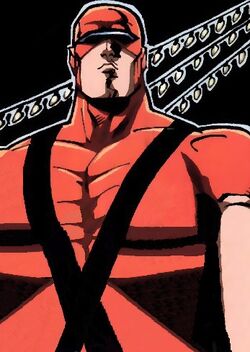 Henry Pym Jr was the son of Hank Pym and Janet Van Dyne and the twin of Hope Pym (aka Red Queen). He gained his father's ability to grow in size and mass. He and his sister worked together to form the group, the Revengers. Using his parents' security codes, the Revengers invaded Avengers Mansion and took Tony Stark, Clint Barton, and Edwin Jarvis prisoner. When the Avengers returned from a parallel planet Henry was shocked to find his sister's vicious streak in dealing with them, torturing them and threatening to kill them. Henry had only intended to prove to the Avengers that they "couldn't cut it." When the two teams began fighting, Henry switched sides, and when Hope attempted to use the Mansion's self-destruct, it was he who stopped her, having been inspired by the newest Avengers.[1]

In order to work off his criminal activities, Big Man joined Special Agent Arthur Weadon's Team, an anti-terrorism task force and work release program for super-criminals. He worked under the direction of Kaine with Quickwire and Raptor.[2]

When a second Weadon squad was formed, Kaine mentioned two former members graduated with honors, while the third went rogue and was hunted down by Kaine himself. It's likely Big Man and Raptor were the successful graduates Kaine mentioned.[3]

Big Man has the ability to grow in size; his strength grows proportionately.

Like this? Let us know!
Retrieved from "https://marvel.fandom.com/wiki/Henry_Pym_Jr._(Earth-982)?oldid=5680118"
Community content is available under CC-BY-SA unless otherwise noted.