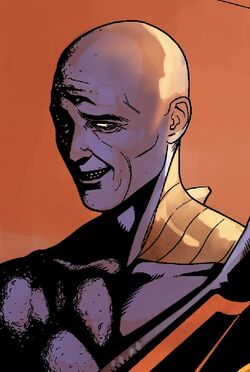 Hephaestus is a member of the Olympians a group of humanoid beings that hail from the pocket dimension; Olympus. He was worshipped by the humans of Ancient Greece and the Roman Empire. He was the God of fire and metal,[1] Patron god of blacksmiths, weapon maker and armorer of Olympus[1]

Hephaestus was the son of the king and queen of the Olympians; Zeus and Hera. Hera threw him from Mount Olympus because he was crippled; he fell into the ocean and was raised by Thetis. It is on Earth where he became a master craftsman. He was later accepted back to Olympus, and became the craftsman of the gods, creating majestic armors, shields and weapons.[3]

He was forced marry Aphrodite by Zeus to prevent a war of the gods fighting for her hand.[3] He later caught his wife Aphrodite cheating on him with Ares he dragged them around the city in a net. Pan was one of the spectators laughing.[3]

In 146 B.C., the Romans conquered Macedonia and then Greece. They even adopted Olympian Gods, changing many of their names in the process. Hephaestus became "Vulcan"[4]

The first encounter between Hephaestus and some of the heroes of this world, in addition to his brother Hercules, took place during the war between the Mount Olympus and Asgard, that faced sprouts of both pantheons both, before the watched letter of the patriarchs.[5]

Hephaestus, like the rest of the Olympic Gods, was involved in the schemes of Typhon, that sent Hephaestus and his companions to limbo, [6] as well as the conspiracies of Ares, that turned crystal to all the Olympian Gods.[7]

Hephaetus was a witness as Zeus gave sufficient power to Thor to revive Odin, and this revived the other Asgardians.[8]

Later Hephaestus would construct, at the request of Hercules, a new battle uniform, after his original was destroyed during a battle.[9]

Hephaestus also battled the Avengers on one occasion, when Zeus wrongly blamed them for the injuries of their teammate, Hercules.[10]

Hephaestus possesses all of the conventional powers of an Olympian god.

Hephaestus is a highly skilled craftsman and blacksmith. He crafts all of the weapons and armor used by the Olympians. He is also a formidable hand to hand combatant and has proven himself able to hold his own against the likes of Thor.

Hephaestus is forced to wear an enchanted pair of leg braces in order to hold the shattered bones of his legs in place so that he is able to walk.

Hephaestus often uses a sword or a shield. He has even been known to wield a blacksmith's hammer in battle.

Like this? Let us know!
Retrieved from "https://marvel.fandom.com/wiki/Hephaestus_Aetnaeus_(Earth-616)?oldid=6428208"
Community content is available under CC-BY-SA unless otherwise noted.