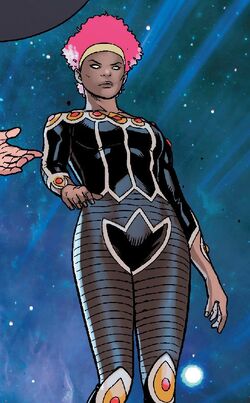 Hera is a member of the Olympians a group of humanoid beings that hail from the pocket dimension; Olympus. She was worshipped by the humans of Ancient Greece and the Roman Empire. Married to Zeus she is Queen of Olympus, Goddess of marriage,[1] childbirth,[1] women,[citation needed] and fidelity.[citation needed]

Hera is the youngest daughter of Cronus and Rhea, beings known as Titans who once ruled Olympus. The Titans were the offspring of the sky god Ouranos and the primeval earth goddess Gaea. Cronus overthrew his father's rule by fatally wounding him. The dying Ouranus prophesied that Cronus would likewise be overthrown by one of his own children.

As a result, upon the birth of each of his own children, Cronus had the infant imprisoned in Tartarus, the most dismal section of the extra dimensional underworld known as Hades. The offspring he sent there were Hades, Poseidon, Demeter, Hestia, and Hera. Appalled at the mistreatment of their children, Cronus' wife Rhea concealed her sixth pregnancy from him and secretly gave birth to Zeus and hid him on Crete.[4]

Zeus grew to adulthood and then set about taking revenge on Cronus. Zeus went down into Tartarus and freed his siblings. Hera and the others fought a ten year war with the Titans which ended with Zeus' victory. They imprisoned most of the male Titans in Tartarus.[5]

Age of the Olympians

Hera married Zeus and along with Poseidon, Demeter and Hestia, together with Zeus' children Apollo, Ares, Artemis, Athena, Hephaestus, Hermes, and Venus, comprised the membership of the high council of the Olympian gods known as the Pantheon. Hestia later resigned her seat in the council in favor of Zeus' son Dionysus. Zeus' brother Hades was not a member of the Pantheon, preferring to spend virtually all of his time within Hades, which he ruled.

In 1000 AD, the Third Host of the Celestials occurred, during which the aliens informed they would return 1,000 years later to judge Earth's right to continue existing. While the pantheons prepared for war, Gaea planned a peaceful solution to the problem with many goddesses, among them Hera.

In 1919, she and Frigga, wife of Odin, chieftain of the Asgardian Gods, discovered Mark Cadmon living on the streets of Chicago, Illinois and saw his true untapped potential. They placed him among a group of other young adults who became known as the Young Gods.[6]

By the late 1940s, Hera --assuming her Roman name of Juno-- had relocated with the other Olympians to the planet Venus and were briefly under the rule of Aphrodite who took on her Roman name as well. When Venus came to the aid of an office girl named Lucy whose boyfriend Frank Foster became obsessed with Juno, Venus decided to let him meet her face to face. The easily jealous Juno proved to too much for Frank to handle after the goddess got into a fight with a waitress. Later, when Juno crossed paths with Venus' lover Whitney Hammond. With her romance in jeopardy, Venus returned Juno back to Olympus.[7]

Ruler of the Olympians

After Zeus' death at the hands of Mikaboshi, Hera inherited his thunderbolt and position as ruler of the Olympians, promising a new era to her race. However, Hera abused both of her powers as well as of her subordinates, indirectly killing Amadeus Cho's parents, making an uneasy alliance with Norman Osborn, bullying Poseidon into submission with Pluto's help, expelling Apollo and Artemis simply for not being her children, and extending her hatred over her own children like Ares, Hephaestus and Hebe for even the smallest disobedience. Ultimately, her ambition grew to the point that she tried to recreate the whole universe with the Continuum, but while resurrected as a child, Zeus convinced her to give up such insanity. Unfortunately, Typhon, temporarily controlled by Hera's mystical powers betrayed her, slaying both her and Zeus while protected by the Aegis breastplate. Their souls where promptly taken by Thanatos to the underworld.[8]

Their souls would not rest forever. Mikaboshi, now calling himself the Chaos King, conquered the relative spirit realms of the gods of earth and enslaved all the souls, included Zeus and Hera in Hades. Hercules resurrected both of them under his own power.

When Hulk tried to force Zeus to cure A-Bomb and Red She-Hulk, Hera sensed his true noble reasons and informed everyone present of them. She pitied the Hulk, but Zeus still refused to help, claiming that such altruism was the "wrong religion." Zeus quickly beat the Green Goliath into submission. Hera witnessed Hercules freeing Hulk from his torment, and when she asked Zeus why he allowed Hercules to do such thing, Zeus replied that the Hulk had brought his own punishment upon himself long ago.[9]

Olympian Physiology: Hera possesses the conventional superhuman physical attributes of an Olympian goddess.[4] However, some of these powers are more developed than those of the majority of her race.

Hera is a fair hand to hand combatant. Though she has had little experience and no formal training, her natural Olympian physical capabilities make her a formidable combatant against foes. She is also a cunning strategist and manipulator.

Class 25; Hera possesses a level of superhuman strength comparable to an Olympian goddess, enabling her to lift about 25 tons.[10]

Dimensional teleportation using her own powers.

Like this? Let us know!
Retrieved from "https://marvel.fandom.com/wiki/Hera_Argeia_(Earth-616)?oldid=6451975"
Community content is available under CC-BY-SA unless otherwise noted.