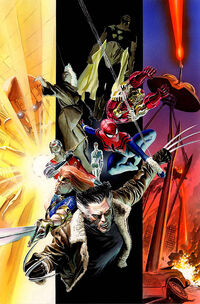 Origin
Formed by X-51 to warn alternate realities of the Celestial embryo growing in each alternate Earth's core.

Place of Dissolution
The Negative Zone of Earth-9997

The seed of events that led to the creation of the Heralds began many years before the formation of the team. It all began on Earth-9997 when retired super-hero Aaron Stack (aka, Machine Man, X-51) was selected by Uatu the Watcher to take his place as the aging Watcher was blinded by Black Bolt. The intent was to wipe X-51 of his false humanity so that he could record the events transpiring on Earth without emotion.

This did not work however, and when X-51 learned that the beings of Earth were manipulated by the Celestials to become anti-bodies to protect a growing Celestial implanted in Earth's core that would destroy the planet upon birth, X-51 revolted and, with the help of Reed Richards, Black Bolt and Galactus, was able to stop the Celestials and destroy the embryo growing in Earth's core.

Three years after this victory, Galactus returned to the Moon, troubled by the fact that when he was summoned by Black Bolt to defend the Earth he was called "Franklin" (on Earth-9997, Galactus was converted into a star, and so Franklin Richards' mutation was advanced the third tier of mutation, where one's abilities and self definition are defined by others, he was convinced he was Galactus to restore balance to the universe) and demanded to know who Franklin Richards was.

X-51 was caught in a tough spot, as revealing that Galactus was really Franklin Richards would reverse the work of years and the Celestials would be left to reproduce unchecked without Galactus to balance their population. In the end, just when X-51 was about to reveal the fate of Franklin Richards of Earth-9997, he instead accidentally showed Galactus the fate of Franklin Richards of Earth-811 (on Earth-811, Franklin was a mutant rebel that was killed by a Sentinel robot during an escape attempt). This knowledge satisfied Galactus who then returned to the stars to continue his life's purpose. X-51, confused by this contradiction, confronted Uatu about how he could have pulled that information. The blind Watcher informed X-51 that there were many alternate realities, and many alternate Earth's with their own Celestial embryo's growing in their cores.

Later, through the visions of Kyle Richmond (the hero formerly known as Nighthawk), X-51 soon learned that the universe that preceded that of Earth-9997 was destroyed by Celestial over-population, and in its wake, the present universe came into existence. This new universe was later fragmented further due to manipulations caused by time travel, which did not change history so much as it created a divergent reality. Most time divergences were caused by manipulation of events by the demonic Mephisto. With each divergent reality, a new Earth with a new Celestial embryo was created.

After a time when X-51's world was saved from destruction caused by the death of the Celestial embryo (causing the Earth to repolarize itself), X-51 determined to warn other realities of the danger the Celestials posed to their home worlds. To do this, X-51 determined to gather a team of "heralds" from different realities, promising them to grant whatever they wanted most in return for their aid. These heralds would then travel to alternate worlds and warn those realities' Reed Richards (X-51 presumed that since it was Reed Richards of his Earth who came up with a way to defeat the Celestials plot to destroy Earth, that the Richards of alternate realities would be the ideal choice as well) of the danger posed by the Celestials procreation.

Of the realities he visited, X-51 selected the following individuals:

After explaining the group's mission to them, X-51 split the group up in teams of two. Each team would travel to a different reality and warn that world's Reed Richards. Each team went on their mission despite the protests of Uatu, who warned them that they were playing with forces beyond their control.

When all the heroes returned to Earth-9997 they had found that Uatu was going to be executed by a collection of Watchers from alternate realities who had come to punish him for revealing the truths of reality to outsiders. The group battled the Watchers and kept them away from from Uatu. When they were cornered, a last minute distraction from Killraven (having decided to return to his comrades) gave X-51 enough time to activate the citadel's portals and transport each Watcher onto the surface of their respective Earth.

This action not only made each Watcher guilty of the same crime they charged Uatu with, but also made the citizens of each Earth aware of the fact that they were being watched. This, according to X-51, was the best way of warning every alternate Earth, because it wasn't Reed Richards that caused the turn of events on his world, but simple human curiosity. With their mission accomplished, X-51 brought the Heralds to his Earth in order to begin fulfilling their wishes as promised:

Since all the other members otherwise got their wishes, X-51 joined a number of Earth's heroes who did not travel to the Negative Zone and traveled to Britain where they fought a final battle against Mephisto who was attempting to take over the world with the help of the Deviants. This plot was stopped and order was restored to the world, it is presumed that X-51 returned to the Moon to resume his role as the Earth's Watcher.

Equipment: While on their original mission, each pair had a device that they were to give to Reed Richards that explained their mission. X-51 often used the devices in Uatu's citadel to monitor and collect the information required by each Herald in order to fulfill his promises to them.
Transportation: The Heralds were able to transport themselves to other locations and alternate realities through the portal system at Uatu's citadel on the Moon. These portals were able to transport its travelers anywhere they desired. Limitations to transportation, if any, are unknown.
Weapons: Each Herald had their own unique weaponry, see individual entries for more information

Retrieved from "https://marvel.fandom.com/wiki/Heralds_(Earth-9997)?oldid=5547657"
Community content is available under CC-BY-SA unless otherwise noted.