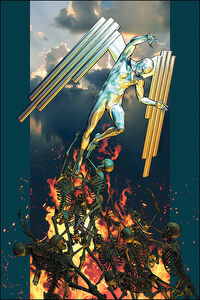 Gah Lak Tus's Silver Men are silvery humanoids that appeared on Earth ahead of Gah Lak Tus. The Silver Men were sent to induce suicide on a massive scale in order to minimize the possibility of a resistance.

The Silver Men founded suicide cults around the world as Gah Lak Tus drew near. After Gah Lak Tus' retreat from Earth, a lone Silver Man was the only herald left alive and disappeared before bemoaning the cosmic entity's defeat.

Retrieved from "https://marvel.fandom.com/wiki/Heralds_of_Gah_Lak_Tus_(Earth-1610)?oldid=5547658"
Community content is available under CC-BY-SA unless otherwise noted.