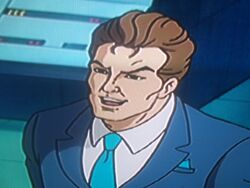 Doctor Herbert Landon was a friend of Hank McCoy, and after Hank scrapped his research for a cure for his mutancy, Landon continued with it, founding the Brand Corporation, and while he claimed to the public to be working on a cure, his hidden agenda was to create a formula which would destroy all mutant-kind. He also told the Kingpin that he would create a mutant army for him, but this was never his intention. The Hobgoblin was aware of this, and forced Landon to pay him to keep quiet.

Landon attempted to test his mutant destroying serum out on McCoy himself, and had his men kidnap Beast.[1] However, Wolverine and Spider-Man tried to save him, and at the same time Hobgoblin downloaded all of Landon's research, and threatened him with it,

resulting in Landon carelessly falling into his serum, causing him to mutate into a large creature. Spider-Man and the X-Men stopped him, but he was left with a permanent green half side to his face.[2]

Despite his previous failure to create a mutant army for the Kingpin, he later became the crime lord's lieutenant, replacing Alistair Smythe as his chief scientist. He used his bio-engineering skills to transform Smythe into a humanoid cyborg, but Smythe regained his consciousness and defected from the Kingpin.[3] Landon also reproduced the Super-Soldier Serum for the Kingpin, and tested it out by turning Felicia Hardy into the Black Cat.[4] Landon later hired the Shocker to steal the Neogenic Recombinator. Landon was hospitalized after Morbius drained his plasma.[5] Landon was then hypnotized by Mirium the Vampire into revealing the location of the Neogenic Recombinator.[6]

When mutated into a large creature, Landon was able to absorb electricity to use as energy, and grow in size.

Like this? Let us know!
Retrieved from "https://marvel.fandom.com/wiki/Herbert_Landon_(Earth-92131)?oldid=5795511"
Community content is available under CC-BY-SA unless otherwise noted.