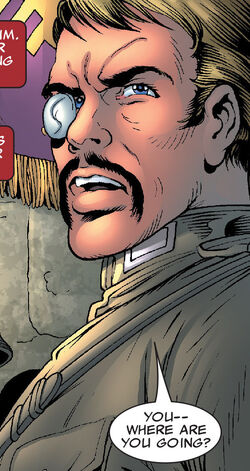 After the death of his father, Baron Hobart Zemo, in 1879 a young Herman assumed control of the Zemo Barony. Indifferent to the times, Herman allowed the Barony to be weakened by socialist reforms as was much of Germany. Herman's need for stronger allies led him to take part in World War I.

During the war, Herman encountered the original Union Jack and waged chemical warfare on British troops using mustard gas. Herman's time traveling grandson, Helmut, became annoyed with Herman's boasting at the slaughter of their enemies while his own men were starving and Castle Zemo was reduced to rubble.

Herman seemed to have an interest in the sciences much like his son and grandson. Herman added special additives to the mustard gas he used to kill the British soldiers to make it more potent.[2]

He was a cold-blooded commander, who used his knowledge in engineering and science to increase the effectiveness of weapons (including chemical weapons).

Like this? Let us know!
Retrieved from "https://marvel.fandom.com/wiki/Herman_Zemo_(Earth-616)?oldid=5657709"
Community content is available under CC-BY-SA unless otherwise noted.